'He was unlucky!' - Podolski explains why Bayern star Gnabry failed to make the grade at Arsenal 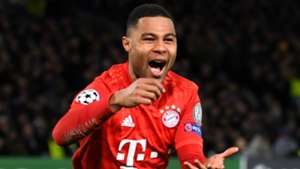 Bayern Munich winger Serge Gnabry failed to make the grade at Arsenal due to a combination of bad luck and injuries, according to Lukas Podolski.

Gnabry rose through the youth ranks at Arsenal before graduating to the senior squad in 2012 at the tender age of 16.

The pacey attacker was tipped for a bright future at Emirates Stadium, but ended up being shipped out on loan to West Brom after struggling to earn a regular place in Arsene Wenger's line-up.

The Frenchman was reportedly eager to retain Gnabry's services, but he pushed for a move away from the club in the summer of 2016, with Werder Bremen eventually snapping him up for ?5 million.

The Germany international racked up 27 Bundesliga appearances during his first year at Weser Stadion, and impressed enough to convince Bayern to launch a bid for his services.

The Bavarians tied Gnabry down to a three-year deal after triggering the EUR8 million release clause in his contract, before loaning him out to Hoffenheim for the 2017-18 campaign.

The ex-Arsenal starlet joined up with his new team-mates at Allianz Arena one year later, and has since fulfilled the immense potential he showed as a youngster in north London.

Gnabry played a key role during Bayern's run to a league and cup double last season, and has built on that platform by establishing himself as one of the most deadly wingers in European football.

Podolski, who witnessed his compatriot's talents up close during his time at the Emirates, is "pleased" to see an old team-mate thriving in the Bundesliga after his misfortunes with the Gunners.

"He was unlucky and had a few injuries. He did well in training," the ex-Arsenal striker said of Gnabry during the May edition of FourFourTwo magazine.

"Off the pitch we spent a lot of time together, going for dinner. But sometimes football is like that, or you find a manager who gives you more confidence.

"Serge can shoot with both feet, and he is powerful and quick - a bit like me, only I don't have a right foot like him!

Gnabry has hit 18 goals in 33 appearances across all competitions for Bayern this season, including four against Tottenham in a stunning 7-2 victory away from home in the Champions League group stage.