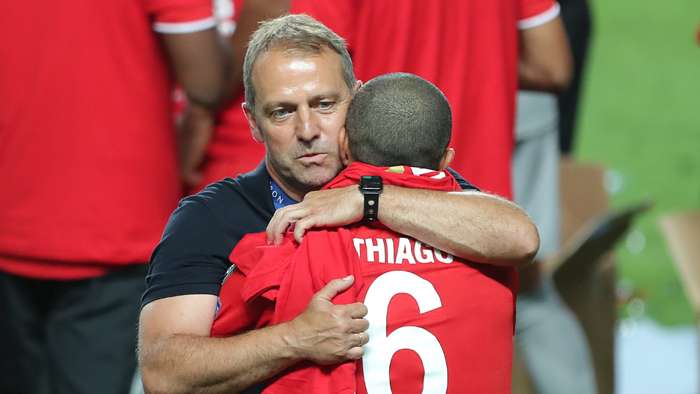 Bayern coach Hansi Flick has joked that Liverpool targetThiago Alcantaracommitted to the club after their Champions League triumph against Paris Saint-Germain.

Thiago started in the heart of midfield as the German giants won their sixth title in the competition at the Estadio da Luz on Sunday, with Kingsley Coman's second-half strike earning a 1-0 victory.

The Spanish international's future has been subject to much speculation over recent months with Liverpool rumoured to leading the race for his services,while Arsenal are also reportedly keenon the playmaker.

When asked where Thiago would be playing next season, Flick spoke in jest about the 29-year-old staying at the Bavarians - but revealed clarity would come soon.

"He told me that he would stay at Bayern," Flick joked in his post-match press conference.

"I just thanked him. I don't know where his future lies, he doesn't know himself yet.

"We'll have to wait and see what happens in the next few days."

Because Thiago is entering the final year of his contract at Bayern, he is valued at just€30 million (£27m/$36m) - with the coronavirus pandemic's affect on financesalso driving down his price.

Former Manchester United star Wayne Rooney believes Thiago's all-round skills in midfield would be a great addition to the Premier League as whole.

He also spoke of how close the ex-Barcelona player was to joining the Red Devils seven years ago and joked about his rumoured move to Anfield.

"He almost came to United in 2013 and now Liverpool are linked with him. He’s one of the best midfielders around – I just hope he doesn’t go there!," Rooney told The Sunday Times.

"He can take the ball, be composed on it, keep things ticking over – and he’ll put his foot in. He’s an all-round midfielder, really, with a bit of everything. He backs up that Bayern press and he drops in between the centre-halves to take the ball yet can also join in when they’re playing around the other box too.