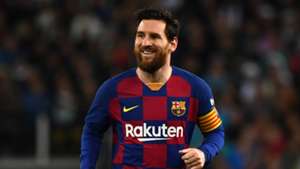 Lionel Messi's lean spell in front of goal is not causing Quique Setien to panic, with the Barcelona coach insisting "it could happen to anyone".

The usually prolific Messi has failed to score in six of his last seven games and was a peripheral figure in Sunday's 2-0 Clasico loss to Real Madrid .

That uncharacteristically unproductive run of form for Messi has coincided with Barca losing top spot in La Liga, being knocked out of the Copa del Rey and being held to a 1-1 draw in the first leg of their Champions League last-16 tie with Napoli.

However, speaking ahead of Saturday's home match with Real Sociedad, Setien claimed to be entirely unconcerned by Messi's apparent downturn.

"I don't care that he didn't score recently," said Setien. "If he scored it would be better, but it has never bothered me.

"It could happen to Leo or anyone. He is having chances and that is the important thing, that chances are generated.

"He has been scoring goals for 14 years, if he now has a period in which he scores less it is not important."

Setien is also unwilling to put too much significance on the recent Clasico defeat.

The reigning champions have come under even closer scrutiny after assistant coach Eder Sarabia's expletive-laden outburst during the game, which Setien admitted was "a bit embarrassing" .

With pressure building on the coach's shoulders, the visit of a Real Sociedad side enjoying a six-match winning run, including a Copa del Rey semi-final triumph, presents a significant challenge for Setien, who is nonetheless upbeat.

"I am calm because I know that we are going to face the game having got over the [Real Madrid] defeat," he said, with Barca a point behind a Madrid team who do not play until Sunday.

"There are no sequels of the Clasico. We are aware that we generated seven scoring chances, which is a significant number. That defeat will not affect us.

"I understand that it is very difficult for Barca and Madrid to win everything until the end.

"The league is very complicated, it is very difficult to win the matches against any team. We are motivated to keep the pace we want."

On the subject of the under-fire Sarabia, Setien said there was no need for his assistant to change his ways, but conceded he should moderate his language.

"He will be as he always has been," said Setien. "He just has to control the way he expresses himself a bit, but he will keep his character and that's it."

Setien will be without Arthur, who has suffered an ankle injury, but the coach does not know how long the midfielder will be out for.

"He has pain, some discomfort, and we have to see how he evolves with the treatment," said Setien.