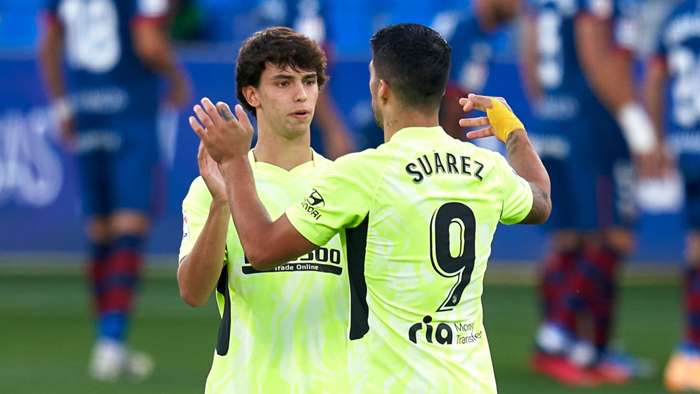 Luis Suarez is expecting a big season from strike partner Joao Felix, who he believes will be a "match-winner" for Atletico Madrid with the help of his team-mates.

The 20-year-old Portugal international is now in his second season at the club, having signed from Benfica as a replacement for Antoine Griezmann in July 2019.

Joao Felix's first term at Atleti did not pan out quite as he might have hoped, scoring just six goals and providing a single assist in 27 LaLiga games.

But 2020-21 is already proving more fruitful as the forward has three goals - from just 15 shots - and an assist in six league matches.

Joao Felix already has two Champions League goals in the new season, too, closing on last year's tally of three, and he has Suarez's backing.

"He hasn't surprised me, because back when he was at Benfica he had already set about showing what a class player he is at a very young age," Suarez told AS.

"It's not easy when you move abroad, but in his first year, which was about settling in here, he produced moments of real quality.

"I think that this season he's really starting to get the fans excited. He feels full of confidence and, if the rest of us give him the help and support he needs, he can be a match-winner.

"But we can't place all the responsibility on his shoulders. If we work as a team and everyone does their bit, that'll have a beneficial effect on him and everyone around him."

Four-goal Suarez is already starting to benefit from Joao Felix's work, although the pair have had only 179 minutes on the pitch together in LaLiga so far.

In that time, they have shared 12 passes, with two of Joao Felix's four balls to Suarez resulting in a chance for the ex-Liverpool striker.

There have been further opportunities in the Champions League, sharing 21 passes in 247 minutes and each creating a chance for the other, albeit Suarez is still waiting to get off the mark in European competition.