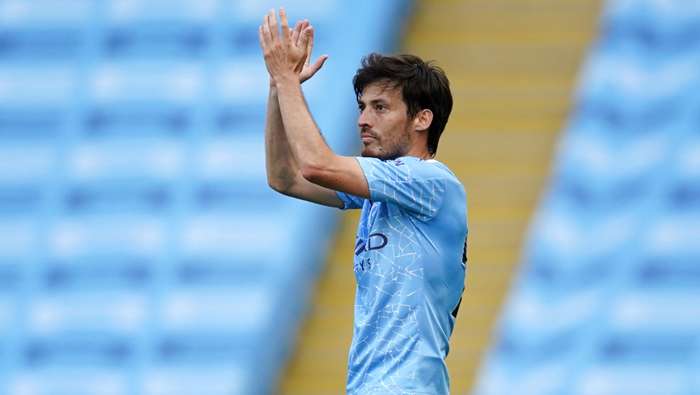 Manchester City manager Pep Guardiola has said that departing club legend David Silva will eventually get the tribute from City'sfans that he deserves.

After 10 seasons with City, Silva will leave the club at the end of the current campaign, with the 34-year-old widely expected to join Lazio.

Silva won 14 trophies during his spell with the club including four Premier League titles, cementing his status as one of City'sall-time greats.

Due to the coronavirus pandemic, however, Silva was unable to receive a proper farewell from City supporters, with all of the club's games being played behind closed doors since football's return.

Ahead of his side's Champions League quarter-final with Lyon,Guardiolasaid that Silva is ready to play a part against the Ligue 1 outfit and also indicated that the Spaniard would receive a proper tribute from the Etihad faithful when they are allowed to return to the stands.

"Absolutely he is ready. The way he has trained and the mentality in his training, I am really impressed about his personality," Guardiola said ahead of the game in Lisbon.

"All of us know it was a pity that his last games in the Etihad were without people but he’ll be back. We have said it many times, he will be back – when the crowd and the people are back in the stadium – and he will get what he deserves."

Guardiola also reiterated that Silva decided long ago that 2019-20 would be his final season at City, saying that any effortconvincinghim to stay would be futile.

"He decided from the beginning of the season to move on," Guardiola said. "It’s like I said a couple of days ago – he has stayed one decade here and now it is time for a new experience."

Silva has made434appearances in his time with City,scoring77 goals while providing 93 Premier League assists, the most in club history.

Following his final Premier League game with the club, Silva admitted that he was emotional thinking about leaving Manchester.

“It was emotional because they are amazing people," he toldBBC Sport."I have been working for them for 10 years and I have a good relationship with them. I love them and I am going to miss all of them.