Hazard: Haaland needs to give assists, he scores too much! 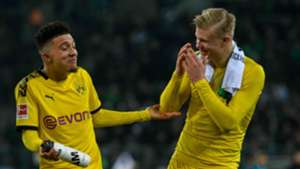 Thorgan Hazard has joked that new Borussia Dortmund team-mate Erling Haaland needs to provide more assists as "he scores too much".

The Norwegian has hit nine goals in his first seven Bundesliga appearances, but turned provider in his side's 2-1 win over Borussia Monchengladbach, setting Hazard up for an early opener.

It was the striker's second league assist since arriving in Germany in the January transfer window, and Hazard has suggested he wants more creativity from the free-scoring teenager.

"I think Haaland needs to give assists, he scores too much," Hazard told Sky Sports Germany jokingly after the game.

"Sometimes it's good also to give assists. Last time I gave him one, so now it's okay, it's 1-1. And next time I will give him one again."

The Belgian winger's goal came in his second game against his former employers since leaving to join Dortmund in the summer, having assisted the winning goal in the first.

However, it was his first time returning to his old stomping ground and the 26-year-old was somewhat apologetic for the impressive performance he turned in, winning the most duels of any player on the pitch and taking the joint-most shots on target in a match where he appeared especially motivated.

"It's always special," Hazard continued. "This is my first time coming back here, and I had a very good moment here. I love everybody, but I'm sorry, I play for Dortmund now and I have to defend my colours."

The win takes Dortmund up to second place in the Bundesliga, just one point behind league leaders Bayern Munich.

However, the reigning champions at the top of the table do have a game in hand, as well as boasting a significantly superior goal-difference.

Hazard will hope to help his new side usurp the perennial champions and has made a fine impact already, notching five goals and 10 assists in 24 league appearances so far.

And if Haaland adds assists to his game - as suggested by Hazard - the teenage striker could well fire his side to a first league title since the 2011/12 campaign.