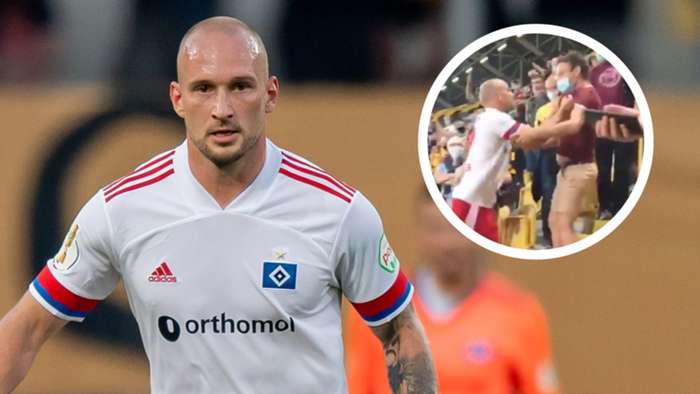 Hamburg defender Toni Leistner has been banned for three games after he went into the crowd and attacked an opposition fan following his side's loss in the DFB-Pokal.

The incident occurred after 2.Bundesliga side Hamburg suffered a shock 4-1 loss to third division side Dynamo Dresden in the German Cup. Leistner was being interviewed after the game when he reacted to something said by the Dresden supporter.

Leistner went into the stands and grabbed the fan before pushing him to the ground, meaning he violated DFB protocols around coronavirus safeguarding as well as the physical attack.

He returned to the pitch after stewards and fans intervened and, after the match, he revealed that his response was provoked by the verbal taunts from those in the crowd.

The presiding judge of the DFB sports court, Hans E. Lorenz, said the ban applied to all of Hamburg's competitive fixtures, meaning Leistner will miss upcoming matches against Paderborn, Erzgebirge Aue and Greuther Furth in the German second tier.

Leistner, who played for Dresden between 2010 and 2014, later apologised for his actions, which occurred at one of the first football matches in Germany to allow fans into the stadium since sport resumed following the coronavirus pandemic.

"After the match in my hometown, I was verbally abused from the stands. I can usually cope with it. But this was extremely and massively below the belt, against my family, my wife and my daughter," hewrote on Instagram.

"That's when I lost it, even more so because it was already an extremely emotional match for me. Regardless, this should have never happened to me. I am a father who wants to serve as a role model. I apologise in all forms and can only promise that -- no matter what insults are thrown my way -- this will never happen again."

Dresden condemned their own fans responsible for provoking the incident, promising to investigate what prompted Leistner's reaction.