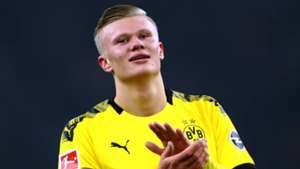 Erling Haaland has offered hope to Manchester United and Real Madrid by hinting that he would like to emulate Zlatan Ibrahimovic by experiencing life in many different countries.

The exciting teenage frontman has already spent time in his native Norway with Molde and Austria with Red Bull Salzburg.

He is now starring for German giants Borussia Dortmund, having completed a switch to the Bundesliga during the January transfer window.

Haaland is tied to a long-term contract, but talk of future switches to England or Spain refuse to go away and the 19-year-old admits that he may be tempted to follow the lead of iconic globe trekker Ibrahimovic - who has spent time with Malmo, Ajax, Juventus, Inter, Barcelona, Paris Saint-Germain, Manchester United, LA Galaxy and AC Milan.

"I like his mentality and how he sees different things," Haaland told FourFourTwo of a legendary Swede.

"I think I've always had that confidence, too - that's just me.

"I also like how he moves from one club to another, in another country - which isn't easy - but he always comes in and just bangs in goals, from the first second. I liked seeing that.

"We're both strikers and we're both tall. But we have a different game. It's hard to compare us. I am who I am."

Pressed on the interest which has been shown in him from Old Trafford and Santiago Bernabeu, Haaland added: "It's always nice when clubs are interested. It means you've done something right."

A move to Manchester over the winter would have seen Haaland reunited with fellow countryman Ole Gunnar Solskjaer - the man currently calling the shots at the Theatre of Dreams.

"I arrived at Molde as a young kid, and he helped me a lot," Haaland said of the Red Devils boss.

"He was a good finisher, and helped me with striking skills and different finishing methods. He's been important in my career."

Those words of wisdom have helped to turn Haaland into one of the most fearsome strikers in European football, with 12 goals for Dortmund added to the 28 he managed for Salzburg this season.

"I've been doing this my whole life," said the confident youngster.

"It's what I wanted to do when I was older. It's what I do. I always knew I'd be a good player, but things have been going fast. I like that speed!"