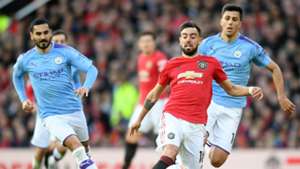 Ilkay Gundogan has accused Bruno Fernandes of diving to earn the decisive free-kick which allowed Manchester United to open the scoring in their 2-0 derby win over City.

The Red Devils broke the deadlock after half-an-hour at Old Trafford on Sunday, with Anthony Martial volleying through the hands of Ederson.

He had been teed up by a clever lofted pass by Fernandes, with the Portuguese showing quick thinking over a dead ball.

The United midfielder had picked himself up after allegedly being tripped by Gundogan, but the City star maintains that he did nothing wrong and that the Blues were left feeling aggrieved.

He told reporters afterwards: "They were much more aggressive, especially after scoring the first goal. They tried to press very high for 10 minutes afterwards.

"But we started the game really well, got into the last third, but the perception of the last pass was just missing. We had a lot of corners as well, so the chance was there to create more but unfortunately we didn't so this is something on which we have to improve.

"Also there was frustration about the free-kick before the goal - it was not at all a foul. I just touched the ball and he goes on the floor, shouting.

"I don't even know if the referee saw it or just had a feeling that it was a foul. That was very disappointing for me, to be honest because I was straight involved in the action and conceding the goal straight afterwards hurt very much.

"We tried hard after conceding the first one but it just wasn't enough.

"It hurts a lot. Not really the result but that we didn't play our best game, especially creating in the last third.

"Missing Kevin [De Bruyne] is crucial in these kind of games. Unfortunately we were not able to find the last pass to create the chance and score the goal - one was a tiny bit offside.

"That's why we are disappointed at losing there, but it's a fact now and we can't change it so we have to keep going."

The usually reliable Ederson was also at fault for United's second in stoppage-time - as he bowled the ball out straight to Scott McTominay, who calmly stroked home from distance into an empty net - but Gundogan is not looking to point any fingers of blame.

He added: "It's normal. At the end, you are a human being. Even though we are at the top level, we all make mistakes. We play the game, and mistakes are part of the game.

"Eddy has been crucial in so many games for us, and he is allowed to make mistakes. Unfortunately this time they were punished, very crucially for us.

"It's normal - we win together and lose together. That's why we play football, that's why we're a team.

"He will deal with that situation very well. He's angry, disappointed and frustrated, but it's always about how you get out if it.

"He has all of our support and I'm sure he will do much better in the next games."

City will be back in action on Wednesday when they play host to Arsenal but, with the Premier League title long gone, attention is already starting to drift towards the second leg of their Champions League last-16 showdown with Real Madrid and FA Cup quarter-final clash with Newcastle.

Gundogan said: "I feel like this game is always big, one of the biggest derbies in the world. That's why we wanted to perform and play well.

"But we still have some very important games, big games. We play Arsenal now, and Burnley, and then obviously a vital game against Madrid at home and then another crucial game in the FA Cup.

"So we still have the possibility to win silverware, so we will try to achieve that and do better than we did on Sunday."