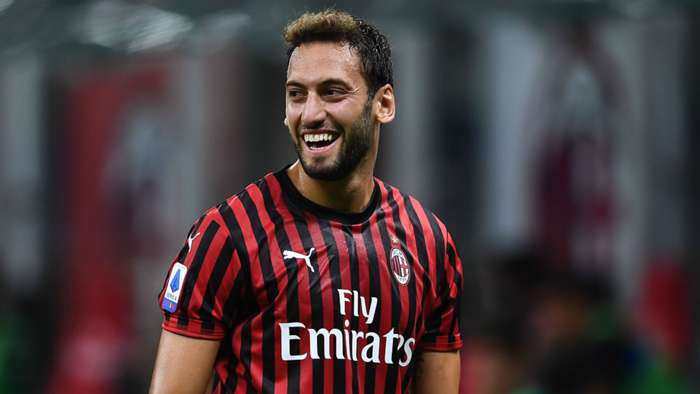 Zlatan Ibrahimovic says that Hakan Calhanoglu has the potential to play like a "real AC Milan No. 10" as he believes the attacking midfielder can live up to the pressure that comes with the historic shirt.

The Turkeyinternational has fired 23 goals in 129 appearances since making the move to Serie A, being an ever-present player since joining.

Ruud Gullit and Clarence Seedorf are among the Rossoneri icons to have wornthat shirt number, and Ibrahimovic says he believes that Calhanoglu can reach that level if he continues on his current path.

"When I first met Calhanoglu, I knew hew who he was. I said to him: 'Wearing the No. 10 of AC Milan is a great thing because all the players who wore the 10 were great. It comes with enormous pressure. It's a huge responsibility, but ifyou work hard you can do it,'" Ibrahimovic told the club's website.

"And in the last six months, I saw him work very hard. A player like Calhanoglu can do it. He did it and has to continue to do it because it's never enough.

"You have to have the mindset that you're never satisfied.In the last six months, he played like a realAC Milan No. 10. I hope he continues like that because he can do great things and can do even more."

Ibrahimovic's stay with AC Milan is set to continue after he signed a new one-year contract on Monday, having rejoined the club in January following a stint in MLS with the LA Galaxy.

The striker will now wear the No. 11 shirt after previously wearing 21 last season.

"I've chosen the No. 11 to play for AC Milan this season," he said. "The fans know me with his number and I wanted to bring it back. Wearing 21, I didn't feel like the same Ibrahimovic of the past, so I asked to have the 11 because it's my number. Simple."

He added: "I've come back here to bring AC Milan back to where it should be and I'll do everything to achieve my goals. We need to work hard andmake sacrifices but I think in the last six months of the last season everyone understood what is needed to achieve our goals.