Guardiola would prefer if Man Utd had Rashford fit for derby 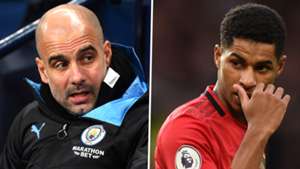 Pep Guardiola would rather that his Manchester City team came head-to-head with a full-strength Manchester United team in Sunday's derby.

Second-placed City head to Old Trafford knowing that the Red Devils will be without star striker Marcus Rashford, who remains sidelined with a back injury.

His absence from the team has been a problem for United, though January transfer window signing Odion Ighalo has impressed since arriving in England from China.

Asked if he was happy that Rashford would not feature against the champions, Guardiola told mancity.com: "I've always said from my first day as manager that I like to have a full squad for opponents."

He pointed to other teams missing star players as proof of his claim. "I would love to play against Eden Hazard for Madrid, Harry Kane for Tottenham and so on," he added.

"I prefer to play when the top players, all the players are available. I hope Rashford can recover as quickly as possible. I look at who is available and after that I control no more."

City are 25 points adrift of Liverpool with 11 games to play, with United seventh in the table but they could move up to fourth with a win against Guardiola's men and providing Chelsea lose at home to Everton.

United seem to be in perpetual crisis under Ole Gunnar Solskjaer with every defeat or limp performance leading to questions surrounding the Norwegian's future.

But against the better sides in the league, United have impressed this season, notably holding Liverpool to a draw earlier in the season and recording two wins against Chelsea, their rivals for a Champions League spot.

Guardiola, therefore, is aware of the challenge posed by the 20-time champions of England.

"United have [Antony] Martial, [Daniel] James, Bruno Fernandes and the way they play is three or four different times and systems.

"We have to understand the quality they have."

Although City have all but relinquished their crown as Premier League winners, they won the League Cup last weekend for the third successive time, while they hold a 2-1 advantage in the Champions League last-16 against Real Madrid.

They are also in the quarter finals of the FA Cup, a competition they won last season to secure a domestic treble.

By contrast, United's last silverware was the Europa League almost three years ago.