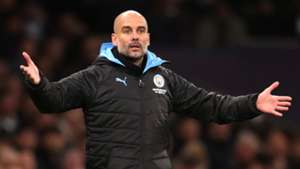 The distance between Manchester City and Manchester United in league position and standing in world football has surprised even Pep Guardiola.

City, champions of the Premier League for the past two seasons, visit cross-town rivals United on Sunday.

Both sides are having relatively disappointing seasons with City's defence of the league all but over with Liverpool on the verge of a first title in 30 years. United, meanwhile, are locked in a battle for Europe and currently sit in seventh place.

Since Guardiola's arrival however, City have enjoyed far greater success than their local rivals - a reality that has taken the Spaniard by surprise.

"I never expected to have this gap between us and United in these three or four years," Guardiola was quoted the Daily Mail.

"I've no doubt about the quality of United and I appreciate the manager [Ole Gunnar Solskjaer]. He represents them in an exceptional way.

"United are working to improve and get closer to the people above them but Manchester City wants to improve also and the distance is what it is."

Guardiola has never lost a league game at Old Trafford, but the encounter on Sunday is arguably more important for United given that City appear destined to finish in the top-four, regardless of the result.

But even a finish in top-four may not yield a place in next season's Champions League for City, who, appeal-permitting, are banned from Europe's top club competition for the next two seasons for breaching Financial Fair Play rules.

Discussing the topic yet again, Guardiola stressed the club aren't in the business of needlessly splashing cash.

"They say 'That's just Manchester City spending money' but of course it's not true. Just look at the numbers," he said.

"When it comes to expensive players we are ranking 23 and 24 but the club has a bad image on that.

"The important thing is to buy good players who fit in to the way you want to play, and their character. You take all the information you can about the player to reduce the uncertainty of him going to a new club.

"Maybe one day it will happen [spending ?80 million on one player], maybe not."