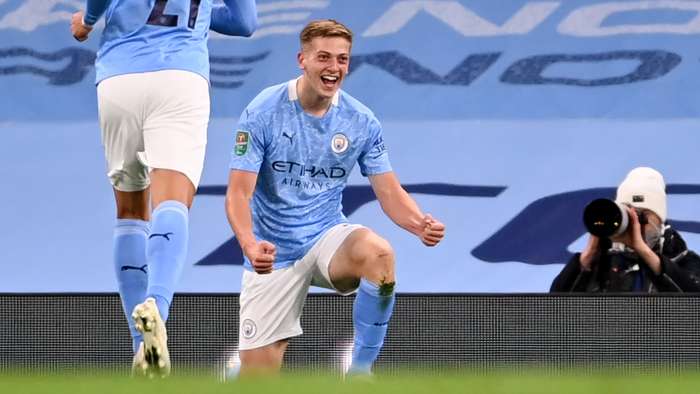 Delap was picked out by fellow City youngster Phil Foden in the 18th minute and made the most of it with an excellent finish rifled into the top corner of goal.

The teenage striker would end up playing the full 90 minutes on debut -scoring with his one and only shot of the game.

With Sergio Aguero still recovering from injury, Guardiola's side are somewhat short on strikers and the City manager hinted Delap could be due more game time after impressing on debut and bringing a different dimension to theside.

"He’s a different striker to what we have in terms of physicality. We see in training how good a finisher he is. Now he has to be calm and keep working," Guardiola said of Delap post-match.

"We are delighted with his performance - he played really well."

American goalkeeper Steffen also made a rare start for City on Thursday and despite conceding, Guardiola also liked what he saw from the 25-year-old.

"Well the goal we conceded was almost unstoppable. We didn’t defend the shot properly. After, he saved on a counter attack," Guardiola said when asked about Steffen.

"He was calm. He was safe. He gave a good performance."

City have now won their first two games of the new season after also beating Wolves 3-1 on Monday and next face Leicester City in the Premier League on Sunday.

The Foxes have also won their first two matches of the new campaign and scoredseven goals in the process as they look to pose a challenge for City's defence.

"It will be incredibly tough, we know that. It is always difficult and it will be no exception," Guardiolasaid of facing Leicester.