Guardiola: It's unfair to compare Jesus to Aguero

Guardiola: It's unfair to compare Jesus to Aguero 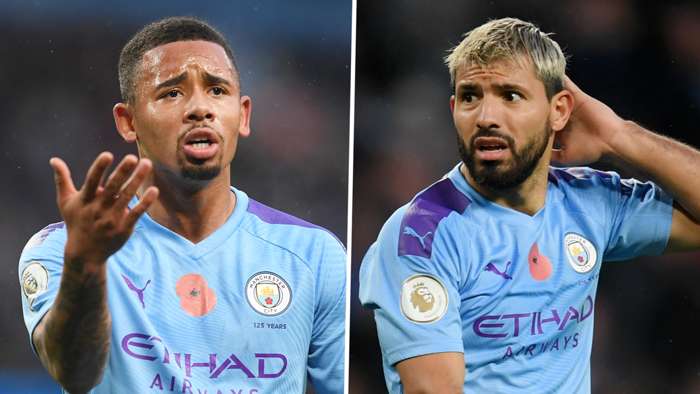 Pep Guardiola believes Gabriel Jesus should be valued in his own right at Manchester City and not compared unfavourably to theclub's record goalscorer Sergio Aguero.

A knee injury to Aguero has afforded Jesus his latest chance for an extended run as first-choice striker at City, although the opportunity has arrived with the Brazil international enduring a barren run in front of goal.

Since scoring a vital winner at Leicester City and heading in the equaliser in City's 2-1 Champions League win at Real Madrid in February, the 23-year-old has gone eight matches without adding to his season tally of 18.

As his attacking colleagues dazzled in Thursday's 4-0 win over Premier League champions Liverpool, Jesus endured another evening of personal frustration and missed the opportunity for a statement performance with the 32-year-old Aguero into the final year of his contract.

Ahead of Sunday's trip to face Southampton at St Mary's – where Jesus enjoyed one of the highlights of his City career two years ago, scoring decisively in stoppage time to seal a 100-point season in 2017-18 – Guardiola offered his backing, citing the forward's "unique" selfless qualities.

"No one can compare to Sergio, what he has done in his career – first because he is older than Gabriel," he said.

"It is perfect for us because they are complimentary. What one guy has the other one maybe struggles with.

"Gabriel has something that is unique in the world. He helps us to be more aggressive. He is a fighter. I remember how many goals we have scored the last three or four or five games thanks to him.

"Gabriel is something special for us. It is unfair to compare players. Every player is different. We have to adapt his qualities for the benefit of him and the team."

By contrast, there are no notable questions over the talentsof midfield talisman Kevin De Bruyne at present.

The playmaker turned in another swashbuckling showing to down Liverpool, opening the scoring with hisfourth consecutive penalty conversion before having a hand in all of the other goals.

"Yes he is a leader, for the role he takes in the locker room and takes responsibility on the pitch," the former Barcelona and Bayern Munich boss added.

"When he is captain, he wants to be captain. He wants to help, he wants to play a part and put the club and the team in front of himself.

"For sure I see increased maturity. Myself, I am not the same person I was when I was 25. I changed in many things. Kevin, for sure."