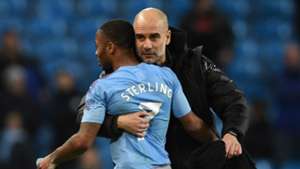 Pep Guardiola and Raheem Sterling will still be at Manchester City next season, says Michael Brown, with the pair expected to be joined by further fresh faces despite the ongoing threat of a Champions League ban.

As things stand, the Blues are set to spend the next two years watching elite continental competition from afar.

City have appealed that ruling and maintain that they have done nothing wrong, but questions are being asked of what the future could hold for key men on and off the field during a period of unwelcome uncertainty at the Etihad Stadium.

Guardiola is yet to commit to a contract beyond 2021 but has stated that he intends to stay put and former Blues star Brown expects that to be the case, telling Goal: "Before Christmas it was slightly questionable whether we would see Pep beyond the end of the season but he came out before this problem with the Champions League came along, he said he will be there next season and he's looking forward to the challenge.

"Last week, after the West Ham game, he said again that he will definitely be there whatever happens. He's said it in his own words."

Along with Guardiola, speculation has surfaced regarding the next move for England international forward Sterling.

He has hinted that a switch to Spanish giants Real Madrid would appeal to him at some stage, but he is another expected to remain in Manchester for the 2020-21 campaign.

Brown added: "He's done an interview and, like many players, has talked about how big a club Real Madrid is. He also said he's very focused on playing for Manchester City.

"He sent a great tweet after the game [against Madrid on Wednesday] in which he said: Glad to be back, have you missed me City supporters, with a wink. I think that just says it all."

Among those who may be tempted to seek a transfer if a European ban is upheld is Sergio Aguero, with the prolific Argentina international set to turn 32 over the summer and aware of the need to spend as much time at the top as he can before having to hang up his boots.

"Players want to play week in, week out," said Brown. "At Manchester City, with Pep Guardiola, you can't always accommodate everybody. There are certain reasons why you change.

"There are many more goals to come from Sergio Aguero and hopefully he'll get one on Sunday [in the Carabao Cup final]. That's what you expect from him as a clinical finisher."

Regardless of whether players are moved out of the Etihad in the next window, Brown expects there to be further arrivals at City - with reinforcements at centre-half considered to remain a top priority.

"Manchester City are always looking to improve their squad and it will be no different this year," said a man who took in over 100 appearances for the Blues after stepping out of their youth ranks.

"Centre defence has been a key mention. I don't think that will be any different and will probably be one where they add. Fernandino has been slotted in there.

"Hopefully [Aymeric] Laporte's injury is not too bad and they can get to the end of the season as best they can. That is probably somewhere that they would like to improve and they haven't just yet."

While City sweat on their future involvement in the Champions League, they have the chance to land another major trophy in the present.

Guardiola's side are set to face Aston Villa in the Carabao Cup final on Sunday looking to collect that piece of silverware for a third successive year.

Watch the Carabao Cup final highlights on Sunday on Quest at 9pm. Catch-up and stream live on dplay.