Griezmann complimented by Setien as he ends Barcelona goal drought

Griezmann complimented by Setien as he ends Barcelona goal drought 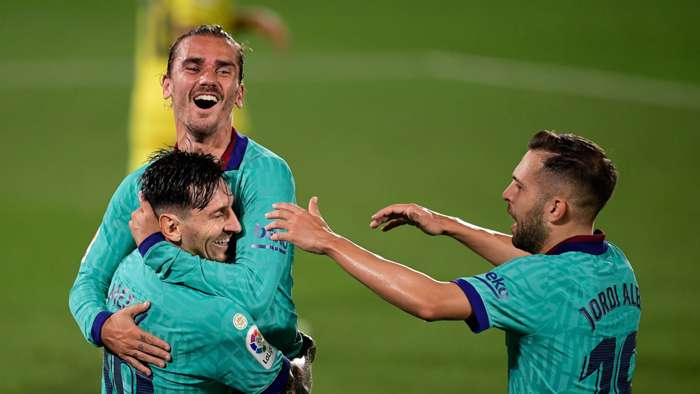 Quique Setien praised Antoine Griezmann after the forward finally returned to the scoresheet in Barcelona's 4-1 La Liga victory over Villarreal.

Griezmann netted his first goal since February to go with strikes from Luis Suarez and Ansu Fati after Pau Torres' own goal as Barca pulled back to within four points of leaders and rivals Real Madrid.

Setien was happy with what he saw from Griezmann, whose goal was his 15th in his first season at Barcelona.

"He has associated himself very well and has been gaining confidence," the Barcelona head coach said, via AS.

"I am very satisfied as I suppose he will be after the goal so beautiful that he has scored, reminded me of one of Lionel Messi's at Real Betis."

"All teams are different. Today, we have had everything," he said.

Setien added: "Other teams like Atletico Madrid or Sevilla, firmer in defence created more problems for us. Perhaps they were stronger than this.

"This helps us a lot in confidence. We have pressed very well and we haven't allowed them to leave. We have made a very balanced match. I would have liked to be right before."

The spot-kick was awarded via the VAR and Setien said the system was becoming more confusing.

"I understand it the VAR less and less," he said.

Pique called for his side to keep pushing ahead of hosting Espanyol in a derby clash on Wednesday.

"We don't like to be behind in the standings, but we will fight to turn the situation around, knowing how complicated it is," the Barca defender told Movistar.

"We will fight to the end."

Barcelona's draws against Sevilla, Celta Vigo and Atletico Madrid have allowed Madrid to take the initiative, with Los Blancos winning all of their seven games since the restart - and only conceding two goals along the way.