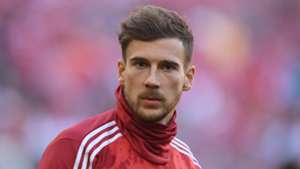 Leon Goretzka is unhappy about his role on the bench at Bayern Munich especially as he is in "top shape".

The Germany international, signed from Schalke in 2018, has made 23 appearances this season, with only 13 being from the start.

The 25-year-old has scored five times and provided six assists in those games and thinks he should be in the starting XI more often, but refused to discuss talks with his coach Hansi Flick publicly.

"Of course I'm not happy if I don't play from the start. I can say that openly and honestly. I'll have to discuss it.

"[Any discussions] remain private, so I ask for your understanding. I have to accept the decision of the coach."

Goretzka believes that, if he can maintain his fitness, he'll be given an opportunity, and says it will be up to him to take that chance.

"You have to suffer in silence and make sure you stay in shape and continue to work on your game," he added. "If the chance comes you must take it."

"I think it's my job to perform. Then I'll have the right to play in the starting XI."

Bayern's sporting director Hasan Salihamidzic says he's sympathetic to Goretzka, and echoed the midfielders sentiment that such discussions should take place outside the media.

"I know what he means, and I also know that he is always sad when he doesn't play. That is why when he comes in he should play well and score, then the coach will put him up again," he said when told of Goretzka's statement.

"[I prefer] if we discuss this just the two of us, or with the coach."

Bayern are currently four points clear at the top of the Bundesliga table as they seek an eighth consecutive league title.

They have a commanding lead in their Champions League round-of-16 tie, having beaten Chelsea 3-0 at Stamford Bridge in the first leg of their matchup.

Bayern's last Champions league triumph was in 2013, when they defeated Bundesliga rivals Dortmund 2-1.