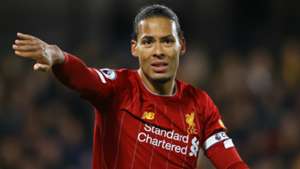 Liverpool need to get Joe Gomez back alongside Virgil van Dijk as quickly as possible, says Stephen Warnock, as the England international makes his fellow centre-half "such a better player".

The Reds saw their talismanic Dutch defender endure a rare off day during a shock 3-0 defeat to Watford on Saturday.

Van Dijk was far from his commanding best at Vicarage Road, with Ismaila Sarr escaping his attention on a couple of occasions to set the foundations for a remarkable Hornets victory.

Dejan Lovren was asked to operate alongside the ?75 million ($96m) man, with the Croatian stepping in to provide cover for the injured Gomez.

Many picked fault in the performance of a divisive 30-year-old who has faced plenty of questions regarding his value to the Liverpool cause in the past.

Watford skipper Troy Deeney has admitted to targeting Lovren as a weak link, and Warnock considers it to be imperative that Jurgen Klopp is able to revert back to his tried and tested formula in the coming weeks.

"Van Dijk has that opportunity to go tight to players because he knows Gomez has that pace in behind.

"Gomez can give you two or three yards - he will still catch you. So he [Van Dijk] knows that he can go tight himself.

"I just think the way Gomez plays as well suits Van Dijk. Partnerships are not always the ones that you think will work as well as they do.

"They complement each other so well."

Klopp stated after an uncharacteristically poor performance from his side against Watford that the knock suffered by Gomez was "nothing major".

That suggests that he could come back into contention for an FA Cup fifth-round clash with Chelsea on Tuesday.

Liverpool will be hoping that proves to be the case as they seek to offer an immediate response to a disappointing setback.

Their unbeaten record has gone in the Premier League, but they remain on course to secure a first title triumph in 30 years.

Klopp's men will also want to defend their Champions League crown in 2020, while the FA Cup offers another route to major silverware for a team that have got a taste of winning in recent times.