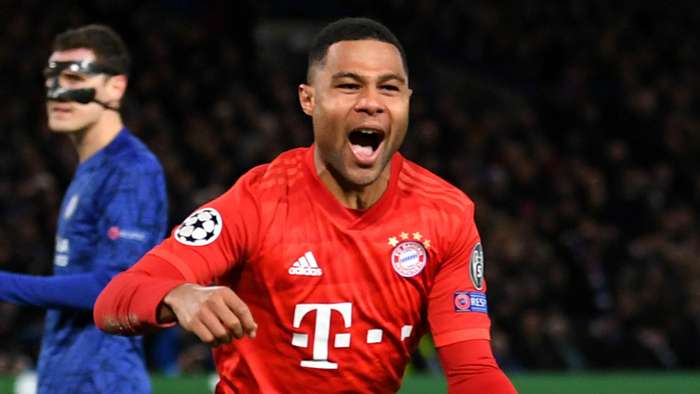 Serge Gnabry has been praised by Bayern Munich icon Oliver Kahn after his “world-class” goal in the Champions League semi-final win over Lyon.

Gnabry scored a second soon after, putting his side on their way to the Champions League final and moving to nine goals in the competition this season.

"His goal can be called world class with a clear conscience,” Kahn told reporters. “He is a player who has developed in the last few months.

“His performance curve goes up from year to year. He is far from reaching the top, but he is really good, he gives top performances.

“It also has to do with the coach, with the coach's communication. That is one of Hansi Flick’s strengths. He can deal with different types of players, he always finds the right words. As a coach, you always have to deal properly with people’s characters, with the players. That is bringing us success at the moment.”

Bayern are in relentless form going into Sunday’s final against Paris Saint-Germain, still unbeaten in 2020 and having won their last 20 games in all competitions.

Flick’s side have scored 23 goals in their last five matches, with a squad seemingly boasting the perfect blend of experience and youth.

Younger players like Gnabry and Alphonso Davies have snatched headlines in recent weeks but Kahn was also keen to pay tribute to the older heads.

"I've made a lot of comparisons thanks to my own experience,” he said. “It's impressive how goal-oriented these players are. They want to win the Champions League. They'll do everything for that, but you have to have a clear framework for that.

“We have Manuel Neuer as the captain, who can lead players. Thomas Muller has grown into a role; he speaks a lot. Joshua Kimmich is very aggressive, he does everything for success.