Giroud: I did everything to try leave Chelsea in January 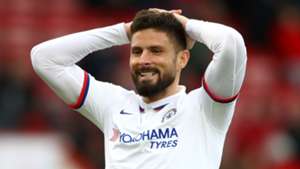 Olivier Giroud has confirmed he "did everything" he could to organise a move away from Chelsea in January.

The France striker has struggled to regain his place in the Blues first-team for most of the season, having made just 12 appearances in all competitions.

Giroud, 33, was linked with a move to Inter, Lazio and Tottenham in the January transfer window, but ended up staying at Stamford Bridge.

The former Arsenal star will be free to leave the Blues when his contract expires this summer, but he did not expect to still be at the club by this point in the campaign.

"Even I saw myself elsewhere to be honest. I went through six complicated months," Giroud told Telefoot.

"That's why I tried to leave in January. I did everything [to leave]. In the end, with the circumstances, Chelsea did not want to let me go. The crucial condition for my departure was to have a replacement.

"The most interesting club for me was Inter. The problem is that it dragged on. In the end, and even if Lazio were there towards the end and Tottenham too, it was no longer a question of where I was going to leave but could I leave. There was nothing to do. I was stuck.

"I knew that anyway I shouldn't start going on strike or wreak havoc in the locker room. First of all, because it is not me and also because I knew there was a good chance that I would stay at Chelsea. That's why I stayed flawless and professional until the end.

"There were two reactions: either I mope around myself or I fight for my place. That's what I did. And the coach who promised me more opportunities to play kept his word and I took my chance."

The ex-Montpellier star says Lyon were also interested in him, but a move to Inter was his top priority.

"Yes, president Jean-Michel Aulas called me. I got him on the phone. He expressed his interest to me and I simply told him that I was flattered by Lyon's interest but that my priority was focused on Inter."

Giroud's place in the France squad for Euro 2020 is in danger because of his lack of playing time, but he hopes to be included this summer.

"Yes, [France coach] Didier Deschamps spoke to me in October. Seeing that it was not going well for me, he warned me. He told me about MLS and that it was not an option to be able to play at Euro 2020.

"Let's see if we play and if the Euros take place," he joked. "As long as the coach thinks I can bring something, I will respond. If I'm not there, of course it would be a disappointment, but I have a lot of hope and I plan to do the job with Chelsea to be selected."

Since failing to leave west London, Giroud has been rewarded for his hard work, starting each of Chelsea's last four games in all competitions with Tammy Abraham injured and Michy Batshuayi out of form.