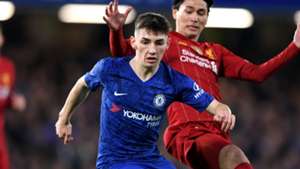 Billy Gilmour's man of the match display in Chelsea's 2-0 win over Liverpool announced his talents to the world and he has now revealed that he used to watch videos of former Blue Cesc Fabregas after signing for the Stamford Bridge side from Rangers.

The 18-year-old signed a deal on his sixteenth birthday amid competition from a host of top European clubs, including Manchester United, Bayern Munich and Barcelona.

Fabregas himself was aware of Gilmour's talents despite having never trained or played with him. Indeed, he praised him after his first start against Grimsby Town earlier in the season, which led to further appearances in the league and a start against Manchester United in the Carabao Cup.

After Frank Lampard showed his trust in Gilmour once again, he came out and spoke about how Fabregas' words gave him a boost.

"Yes, I did see it [after the Grimsby game]," the starlet said. "One of my friends text me, I was buzzing. When I first came to Chelsea it was with the IEP (video analysis youth programme), so you had to focus yourself on a player and mine was Cesc.

"I loved how he played so I just went and watched a lot of videos of him. Now I have got older, I just try to put it into the games and it's working. But no, he is a role model of mine. I never ever trained with the first-team with him, so when he was away I got opportunities around there."

Fabregas still watches Chelsea games after making a move to Monaco over a year ago and once again took to Twitter to comment on Gilmour's display last night.

"He is fantastic. Personality on the ball, decision making, always making angles to offer himself and he has that bit of aggression in him which is very important, especially in the Premier League," Fabregas said in response to a Chelsea fan.

"When you have the quality but also the desire, the work ethic and intelligence, then you can see real potential in a young player. He has all of that."

Still, although he held his own, Gilmour wasn't widely praised in his previous performance against one of England's 'big six' teams, with Man Utd winning 2-1 at Stamford Bridge to knock the Blues out of the Carabao Cup.

Gilmour started that day and he was seen being manhandled by Harry Maguire. Maguire grabbed Gilmour by the neck and pushed him away in a match that has since served as a major learning curve for the Scotland Under-21 international.

"I think that was pointless for him, but he is going to try and bully the young ones! That's what I need to learn in the game. I have to be stronger," he said as he referenced his five foot six frame. "I have been working on that. I can only get stronger.

"That was a learning curve definitely when he gripped me up in the box. I remember that really well. Basically, he was saying as was a wee guy, so pushing me off and gripping me by the throat was something I have to deal with but I won't let that happen again, that's for sure. That's a lesson."

The 2020-21 Nations League draw took place in Amsterdam ahead of kick-off but due to fears over a growing coronavirus pandemic in the United Kingdom, Scotland manager Steve Clark opted not to attend the event.

Instead, he diverted his time to watch Gilmour play at Stamford Bridge and after his display, Gilmour may be in contention for his side's Euro 2020 play-off games in the coming month.

"I was speaking to Andy Robertson who told me after the game. He told me just to keep doing what I am doing. You are doing well and well done tonight," he added.

Now, Lampard may need to call upon Gilmour regularly with a deepening injury crisis beginning to take hold, specifically in his midfield position. Mateo Kovacic left the field with an Achilles injury to add to N'Golo Kante's absence and Jorginho's upcoming three-game suspension.

Gilmour hopes to see Kovacic back soon but he is ready when called upon.

"I think there were more good nerves," he added. "I have had a bit of a taste of it now so I wasn't really nervous. I was more looking forward to it, to go and show what I can do. Tonight was a really good game. We won, stuck together and played really well.

"Hopefully [I will get more chances], I have been learning off them [Kovacic and Jorginho] in training and watching them in games. To play alongside both of them was brilliant. But no, hopefully, Kova is back and fit for the weekend and we will go from there."