Gilmour's brilliant Liverpool performance no surprise to me - Barkley 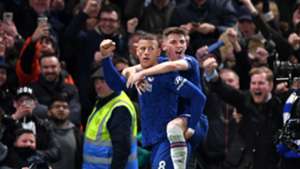 Chelsea midfielder Ross Barkley wasn't surprised to see 18-year-old Billy Gilmour steal the show as he put in a man-of-the-match performance in his side's 2-0 win over Liverpool in the FA Cup fifth round.

Making a rare start for the first-team, Gilmour impressed across the entire 90 minutes with goals from Willian and Barkley securing victory for Frank Lampard's side.

The Scottish teenager was making just his fifth senior appearance for the Blues this season but showed why he could be a star of the future at Stamford Bridge with Barkley adamant his performance on Tuesday won't be a one off.

"He was brilliant today but it's not a surprise to me because of the way he trains every day," Barkley told BBC Sport post-match.

"I seen him last season and he was quality in training and he's showed that with the little chances he's had this season. Today was a top performance. Long may it continue."

Gilmour came through the youth ranks of Rangers before joining Chelsea in 2017 where's he predominantly been part of their youth teams.

This season he's made 11 appearances for the Blues U23's outfit, scoring twice and providing four assists as he looks to convince Lampard he's ready for more first-team football.

Prior to Tuesday's win, Chelsea had won just one of their past five games in all competitions, most recently drawing 2-2 with Bournemouth in the Premier League after a 3-0 loss to Bayern Munich in the Champions League last-16.

While the Reds are in a mini form slump of their own, Barkley believes the Blues' victory on Tuesday was crucial as they look to secure a top-four finish in the league.

"Massive result after two disappointing results," Barkley added. "We needed a top performance at home today and it was a great team performance - clean sheet as well."

Chelsea next host Everton in the Premier League on Sunday with the club only three points clear of fifth-placed Manchester United.

Following their clash with the Toffees, the Blues travel to Aston Villa on March 14 before the second leg of their Champions League clash against Bayern.