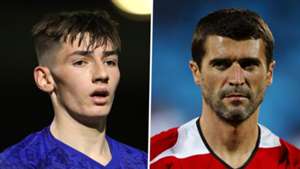 Billy Gilmour has the same "tenacity in his game" as Roy Keane used to have at Manchester United, according to Tony Cascarino, who has praised the Chelsea midfielder for his display against Liverpool in the FA Cup.

The Blues progressed to the quarter-finals of the competition with a 2-0 win over the Reds at Stamford Bridge on Tuesday night, thanks to goals from Willian and Ross Barkley.

Frank Lampard made several changes to the team which was held to a 2-2 draw at Bournemouth at the weekend, with 18-year-old Gilmour drafted in to play alongside Mateo Kovacic and Barkley in the middle of the park.

The Scottish starlet was making only his fifth senior appearance for the Blues, but he showed maturity and composure on the ball belying his tender age, serving as the architect of the majority of Chelsea's best moments over the course of the 90 minutes.

Gilmour's performance reminded Cascarino of United legend Keane, who was similarly confident during his younger days with Nottingham Forest and the Republic of Ireland national team.

"He was thrown in the deep end and absolutely swam, he didn't have an issue at all," the ex-Chelsea striker told talkSPORT.

"In the first 15 minutes, he just set the standard for the game, just getting on it, having that inner belief and dictating the pace of the midfield.

"Without wanting to go over the top, because I'm as guilty as everybody of doing this and getting excited about what you see, but I remember Keane being very similar at this age.

"Roy Keane demanded the ball, he was a fearless footballer.

"When I first saw him at Nottingham Forest and then when he got in the Ireland squad, Roy just enjoyed having the ball, he demanded it, 'give me it'.

"Keane was a little bit older when he first came over from Ireland, but if I'm comparing that to what I'm seeing from an 18-year-old, Roy had that tenacity in his game where he just wanted the ball and never shirked anything.

"That's what Gilmour did last night."

Gilmour could now be in line to retain a place in Lampard's squad when Chelsea play host to Everton on Sunday, which represents a must-win game in their pursuit of a top-four Premier League finish.