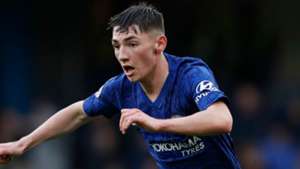 Billy Gilmour is already a "massive asset" for Chelsea, says Joe Cole, with the 18-year-old midfielder considered to form part of the "cream of Europe".

The highly-rated Scot has burst onto the scene at Stamford Bridge during the 2019-20 campaign.

His rapid progress has been stunted by a shut down in competitive action, but he has already made quite the impact in west London.

Frank Lampard has shown that he is prepared to put faith in youth, with Gilmour the latest in a long line of academy stars to see senior minutes this season.

He has joined the likes of Tammy Abraham, Reece James, Mason Mount and Fikayo Tomori in earning regular game time as part of a star-studded squad.

Cole believes Gilmour will take his game to even greater heights with more experience, with his potential marking him out as one of the hottest prospects on domestic and continental scenes.

The former Blues winger told the Daily Star: "We are the cream of Europe now in England, and Scotland too with Billy. We are producing big amounts of these players.

"They just keep coming through the production line. The future is bright for British football. It's fantastic."

Cole added on Gilmour: "Billy is terrific, a real talent. A cultured footballer. He can be what he wants. I like him in that midfield role.

"But I think he might eventually develop and play further up the pitch, like a 10. All Billy needs to do is keep his feet on the ground.

"He's another massive asset for Chelsea. It will all come down to how he performs. Once you've got that shirt it's up to you to deal with it.

"To be where he is and playing how he is, is a massive achievement for him and his parents. He's a well-grounded young man."

For Cole, who won three Premier League titles during his time at Chelsea, Gilmour sits among the most exciting talents to be emerging in the British game.

Asked to pick out his top five, the ex-England international said: "I'm going to go all midfielders because that's what excites me.

"It's a real tough one but I'm going for Jack Grealish, James Maddison, Mason Mount, Phil Foden and Billy Gilmour.

"They are all very similar, handle the ball so well. All very much modern-day midfielders.

"They could be in any order. These guys are really pushing each other to get better. You can bet they're all watching each other and trying to improve."