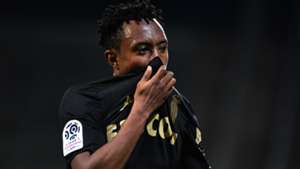 Portugal international Gelson Martins has been banned from football for six months after assaulting a referee, Ligue 1 confirmed on Thursday.

Martins lined up for Monaco on February 1 against Nimes, but after 34 minutes became incensed when seeing team-mate Tiemoue Bakayoko sent off for a rash challenge.

Referee Mikael Lesage was the target of Martins' ire and was pushed twice in an ugly fracas that led to the former Atletico Madrid man joining Bakayoko in receiving a red card.

Nine-man Monaco subsequently went down 3-1, having been tied 1-1 at the time of the double expulsion.

Following the incident Martins was suspended indefinitely pending investigation and has now received a stiff penalty that means his season is now over.

"In light of the nature of the events, the Disciplinary Committee, on February 6, 2020, suspended the player as a precautionary measure," the Ligue de Football Professionnel explained in a statement released on Thursday.

"After examining the evidence and hearing the player's arguments, the Committee has decided to sanction Gelson Martins with a suspension of six months.

A statement from Monaco after the decision was announced reiterated the club's disappointment in the player, though they feel the length of the ban is excessive.

"AS Monaco takes note of the decision of the Disciplinary Committee of the LFP to sanction Gelson Martins with a suspension of six months dating to February 6, a very heavy sanction," the statement read.

"The club once again condemns the unjustifiable behavior of its attacker, but also regrets the excessive length of this suspension, for a player who has never served a disciplinary ban in more than 200 games at the highest level."

Martins apologised for his actions following the Nimes clash, admitting that the outburst was unacceptable and out of character.

"Anyone who knows me knows that throughout my career I have held respect for everyone as a principle - my team-mates, opponents, fans and officials - off the field and on it, where I have never been aggressive against anyone," he wrote on Instagram.

"I feel I must apologise for my attitude which was unwarranted and product of a moment of anger.

"I apologise in particular to the referee Mikael Lesage, but also to my team-mates and our fans."

The midfielder, 24, is in his first full season at Monaco after moving to the principality on an initial loan move in January 2019 following just six months at Atletico Madrid.

He began his career at Sporting, where he starred for three seasons prior to that ill-fated Atletico switch, and is also a regular for Portugal, playing once in the 2018 World Cup.