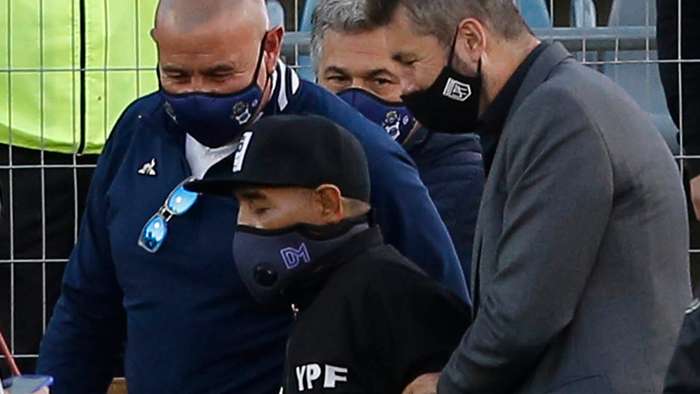 Tottenham, Newell's Old Boys, Napoliand current employers Gimnasia were among the clubs to send their best wishes to Diego Maradona as the Argentina idol prepares for emergency surgery on a blood clot found on his brain.

While at first the star's inner circle assured that the move was routine, the following day his personal physician Leopoldo Luque revealed that tests had discovered a subdural hematoma that would require immediate intervention.

Maradona was thus moved from the clinic to the Clinica Olivos, located in the north of Buenos Aires, with his ambulance followed by dozens of Gimnasia fans who congregated outside to keep a vigil on the legend's health.

And as news broke of the procedure, which Luque insisted was "routine", the world of football was quick to wish him the best ahead of this latest health setback - using the hashtag #FuerzaDiego, meaning in Spanish "Stay strong".

News of Maradona's condition also transcended the world of football, with former President of Bolivia Evo Morales - who received the star's support during the coup d'etat that removed him from office at the end of 2019 - also sending a message.

Leicester City will be hoping to wrap up qualification to the Europa League l...
More