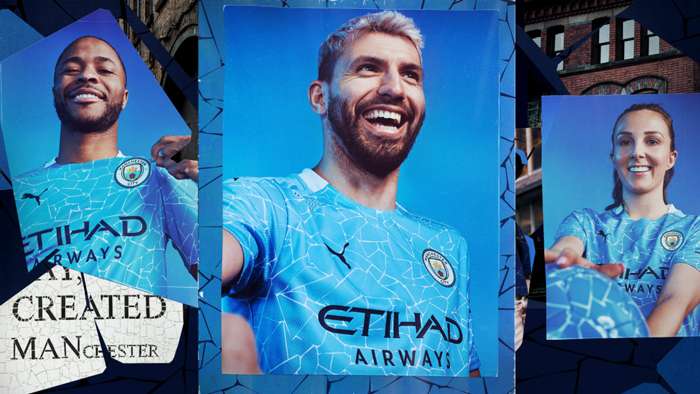 Manchester’s cultural heritage has been a source of inspiration for Puma kit designers since they joined forceswith Manchester City in 2019.

Now City have unveiled their new 2020-21 home shirt, which is inspired by the mosaics of iconic figures that act as wallpaper around Manchester’s Northern Quarter.

A curious mismatch of portraits - from Sean Connery to Bob Marley, Chairman Mao to Hilda Ogden - have all have been immortalised in artworks around the city’s creative quarter.

But the art-form has also played a part in City’s history, going back more than a century to when a mosaic club sign was put up at their former Maine Road home.

“We did our research,” Puma'sseniordesigner, Ulrich Planer, tells Goal ahead of the shirt's debut in Saturday's FA Cup semi-final against Arsenal. “We dived into the history of Manchester and there are so many things we can pull out of the city.

“We want to give the fans a design that only Manchester City can wear - and not any other team around the world.”

The source of those Northern Quarter artworks that have inspired the new kitis Manchester artist Mark Kennedy - a lifelong City fan.

His creations, which also includethe iconic “And on the sixth day God created Manchester”, have had a major impact on the cityscape as well as, more recently,the Etihad Stadium and its surrounding area.

As well as portraits of club legend Joe Mercer on the walk up to the stadium, Kennedy hasbeen commissioned to create lasting tributes to the club’s heroes of the last decade - includingYaya Toure andJoe Hart - around the training pitches of the Etihad Campus.

“All my childhood was spent watching City,” Kennedytells Goal . “To get out of working in a factory, if you had anything about you, you had to be a musician, a footballer or a boxer.

"There was one problem with football, although I enjoyed it, I was really poor. My dog would get picked before meI was that bad!

“I went to see The Fall and The Buzzcocks and I made the commitment to be a musician. During the 80s my whole stock was music. I used to go to matches with The Fall lead singer Mark E Smith and never thought for one minute that my love for them would take me back to sport.But I ended going to City matches with him andthat’s what happened, it all came back to City.”

From music, Kennedy moved into art via a year living as a Buddhist monk and six months in Spain that reignited a childhood love of ceramics, which he thought was perfect for Manchester.

“I married the idea of the iconography of Manchester and the art form of the Mediterranean,” he says. “The beautiful thing about the art form is that it self washes.When it rains it cleans itself - that’s very Mancunian.”

His link-up with City came during the Kevin Keegan erain the early 2000s, when he made an image of cult hero Ali Bernarbia and presented it to the Algerian midfielder.

A friendship developed with the club, and when City moved from Maine Road, Kennedy was tasked withtaking down the original mosaic before the stadium was demolished.

That relationship has continued right up to his most recent work of former captain Vincent Kompany, which was unveiled last year.

“My dream was always to work with the club. I didn’t do it for money, I did it for love. I felt an allegiance to the club,” he says. “I think the current team is fantastic. We have been maybe gifted with maybe some of the best players in the history of football.

“How does it feel to be working for City? It feels incredible. Especially the City we’ve got now. But also it’s good to be an artist coming from my background on the terraces.”

Nearly 100 years on, that original Manchester City Football Club sign on a sky blue background has been revived for a new era, with the clubwantinga unique shirt to represent the city and the club's history.

It may well split opinion, but at least itis notone of the identikit designs that lack individuality.

“They are a very forward thinking club,they they challenge us with new ideas and they want to push the boundaries,” the shirt's designer Planer says of his brief.

“For usas designers, it's very interesting because we can explore new things, develop new things, new colours and yet they are very open to new designs.

“It’s good that we have sometimes an inspiration from the past or a shirt where they they won something - a cup final or whatever, but it's not mandatory. The mandatory thing is doing the next iconic shirt and doing something out there that has not been done yet.”