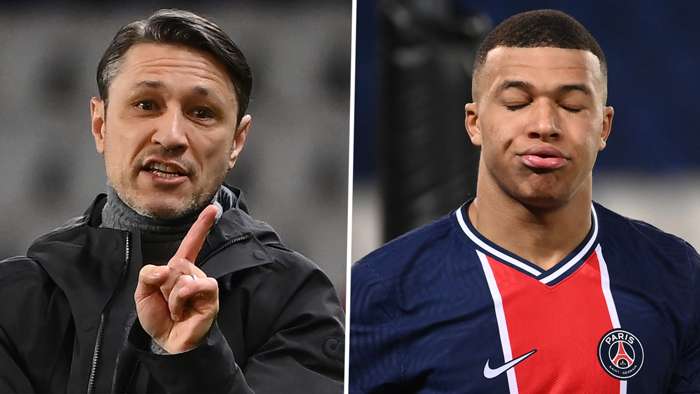 Paris Saint-Germain and Kylian Mbappe were the toast of European football as they dismantled Barcelona 4-1 in the first leg of their last-16 Champions League meeting last Tuesday. Only five days later, however, their own defence of Ligue 1 was thrown sharply into uncertainty.

Monaco have now won nine of their last 10 matches in all competitions and have claimed 26 of the last 30 points available to them in Ligue 1.

It has been a remarkable surge back into the title race, masterminded by Niko Kovac.

Dumped by Bayern Munich little over a year ago, the former Croatia international midfielder’s project was being questioned as recently as mid-December, when his Monaco side had lost three successive matches. Their return to prominence is as much his story as it has been the club’s.

Kovac departed Munich having won the 2018-19 Bundesliga title, but off the back of a poor start to their defence. His farewell match was a 5-1 loss to Eintracht Frankfurt. This, remember, was the side that would go on to conquer Europe so convincingly under Hansi Flick. In Monaco, though, Kovac is rebuilding his reputation.

He arrived in the summer preaching defensive solidarity as being the foundation for long-term success but has instead built a Bundesliga-style team that is free scoring butconcedes just as readily.

The results, initially, were mixed. Now, Monaco, whose games have produced more goals than any other team in the league, are reaping the benefits and are undoubtedly one of the most exciting teams to watch.

To portray Kovac’s approach as being a mindless ‘you score four, we’ll score five’ one, however, would be entirely disingenuous. This was evident with the manner in which his side shut down PSG last weekend.

Monaco appreciated that they could not face academy alumnus Mbappe with their usual, open approach. Instead, they resorted to a defensive style that was focused around nullifying the World Cup winner by sheer weight of numbers.

“Erase Mbappe” was how the plan was branded by Kovac.

“In defence, we showed another face of Monaco because we didn't concede many chances,” he told Canal + after the match.

It was just Monaco’s second clean sheet since Christmas.

The subtleties of his coaching have been evident since Monaco succumbed with embarrassing ease 4-1 to Lyon away from home in October.

At that point, Kovac ditched the 4-3-3 formation he had tried to implement since the start of the season. Kevin Volland, the club’s major summer addition, had foundered wide in that system. It was a pragmatic choice but one more hard-headed coaches would not have taken.

Monaco shifted to a 4-4-2, with Volland moved up top alongside Wissam Ben Yedder. Things briefly clicked, but three defeats in succession told Kovac it was not a permanent solution.

While the formation has been retained, the principles have changed. Instead of attacking in a 4-2-4 shape, Monaco now typically push one full-back forward and have the other tuck in to form a three-man defence when they attack. As such, they transition into an attacking 3-4-3.

Kovac’s brother, Robert, has also played a role in the club’s resurgence. He is the mastermind behind Monaco’s set pieces, with five goals in nine games for centre-back Guillermo Maripan evidence of how well this area of their game is working.

“I’m lucky to be able to rely on Robert, who works hard in these phases,” Kovac admitted before the trip to Paris. “But we’re also lucky enough to have players able to put the ball in the right place.

“We have three tall defenders, which give us an advantage in the opposition’s box. Even our little players like Wissam and Kevin are comfortable in this area of the game. It’s a mix of being able to find the right area and finishing well.”

Off the field, Kovac is said to be well respected among the squad, which he has helped mould together into a well-functioning group that is willing to trust in themselves and their coach.

Publicly, they have stated that finishing in the top five or six is their goal. Already, that is a formality. Instead, they are in striking distance of the top three, and just six points off the pace of leaders Lille.