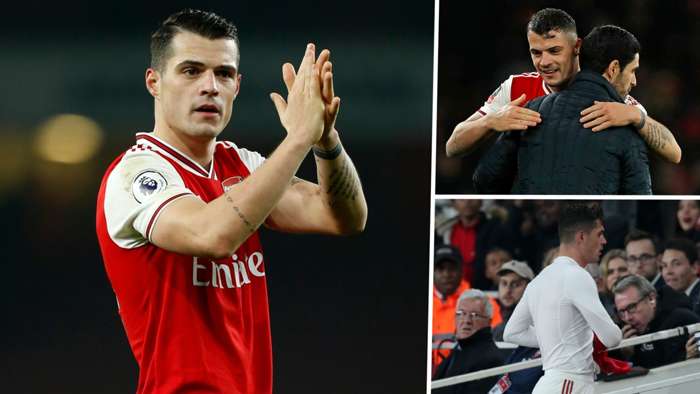 It was a moment few could have envisaged eight months ago.

When Granit Xhaka strode forward and slammed his shot through the legs of Tim Krul to give Arsenal their second goal against Norwich on Wednesday night, the thought of what had happened to him back in October must have flashed through his mind.

On that fateful day against Crystal Palace the Switzerland international seemed to have sounded his own death knell at Arsenal when he told the fans to ‘f*ck off’ as they jeered him off the pitch after he was substituted inthe second half.

It was an incident that saw him banished from the team by former boss Unai Emery, stripped of the captaincy and sent firmly in the direction of the exit door at the Emirates.

A departure seemed inevitable, with Hertha Berlin immediately making it clear that they wanted to take him back to Germany as soon as the transfer window opened in January.

It’s a movethat would have happened had Emery remained at the club. But as soon as Mikel Arteta arrived at Arsenal, just before Christmas, things changed.

Arteta sat down with the midfielder and made it clear he was essential to his plans. The Spaniard gave Xhaka his full backing, he made him feel welcome again and set the wheels in motion for a renaissance which was completed when the 27-year-old scored his first goal of the season on Wednesday night.

“Absolutely,” said Arteta, when asked if he believed Xhaka had gone full circle following the 4-0 win against Norwich. “He’s a player whose commitment goes beyond anything normal.”

The goal against the Canaries completed what has been a remarkable turnaround for Xhaka, one that few could have foreseen in the aftermath of that poisonous afternoon in October.

He even ended the game against Norwich wearing the captain’s armband, just as he had against Sheffield United in the FA Cup quarter-final on Sunday.

In the days that followed the Crystal Palace game last year, no-one would have everdeemed that possible.

Xhaka was furious at what had gone on. The midfielder is a complex character, one who holds very strong beliefs and he felt he had been wronged, not just by the fans but by the way Emery had treated him.

“I told him how much I liked him and what I expected from him,” said Arteta, when detailing how he set about convincing Xhaka he could turn things round at Arsenal. “I told him how important he was for the team and that I was here to help.

“I wanted him to feel that we were right behind him. Not just myself but the whole club.”

After listening to Arteta, Xhaka didn’t need much convincing. Within a couple of weeks he had told the Spaniard that he wanted to stay and has spent the past six months rebuilding a relationship with the Arsenal fans that had seemed beyond repair.

And he hasn’t done that through words, in fact he’s rarely spoken since being brought back into the fold. He’s done it through performances.

Xhaka is the heartbeat of this Arsenal side once again. Left hopelessly exposed in the system used by Emery during the opening months of the campaign, he has flourished alongside Dani Ceballos in a midfield that is far more compact to what we have seen at Arsenal in recent years.

When he doesn’t play, Arsenal miss him. Since returning from lockdown they have played twice without him and, if you include the Manchester City game in whichhe went off injured after five minutes, they have lost on each occasion. But they have won all three of the other games that Xhaka has started.

His importance to the side and to Arteta can’t be questioned. If fit, he is one of the first names on the team-sheet, just as he will be on Saturday afternoon when the Gunners travel to Wolves looking for a fourth successive victory in all competitions.

“Granitleaves every drop of blood on that football pitch every day and he does the same in training,” said Arteta.

“For me, he’s a great example to any other team-mate, the way he looks after himself and lives his profession.

“I’m really happy that we could convince him to stay and could give him another opportunity to learn from the mistake that he made and as well appreciate the player and the person that we have at the club.

“When someone has a difficult moment, we are right behind them. We can give them another chance.”

Arteta offered Xhaka that chance of redemption as soon as he arrived in December and it’s one the midfielder has grasped with both hands.

It’s been a long road back for Arsenal’s former captain, but when he thumped his shot pastKrul on Wednesday night his journey was complete.

As he looked up at the empty stands while celebrating with his team-mates, he must have thought back to that Crystal Palace game in October. It’s an afternoon that now seems a very long time ago.