From an ACL injury on debut to battling depression: How a luckless England hopeful's footballing dream was revived
Match

From an ACL injury on debut to battling depression: How a luckless England hopeful's footballing dream was revived 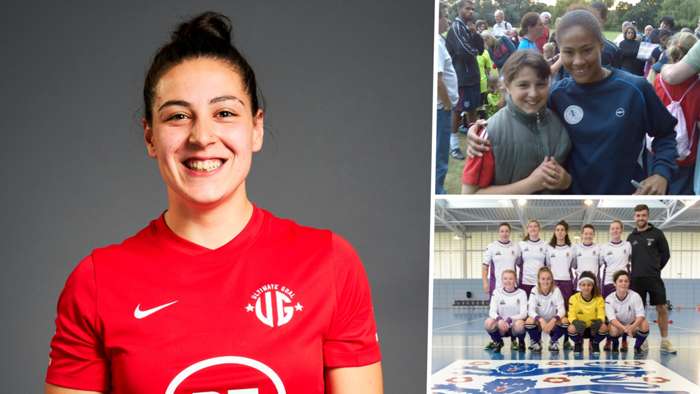 For Selin Buyukgiray, footballing ability runs in the family. It is ashame, though, thatbad luck does too.

Five years ago, his daughter, just 18 at the time, would be hit with the same awful luck on her debut for Championship club London Bees.

“Five minutes in, I got injured. That's how short lived that professional career was,” she tells Goal.

Buyukgiray’stalent was evident from a young age. While still in primary school, her father took her fora trial at Brentford, where England and Arsenal legend Rachel Yankey would be watching over.

“He said, 'Sel, this is your chance’,” the 23-year-old says, recalling the memory fondly.

“’This is how you start making a name for yourself. There's an England legend right there watching you play. You never know what word of mouth can do for you. Make sure you bring your A game' - and I did.”

Shescored 42 goals in 23 games in her first season following the successful trial, playing for the Under-12s despite only being nine years old, and the Buyukgirayname would spread throughout local papers like wildfire.

Soonshe was playing for the Middlesex Centre of Excellence. It was there that doors continued to open, including the chance to join London Bees. The first, though, was in the form of an England talent camp.

It was there, though, that she would be dealt a real blow – failing a fitness test by one shuttle run.

“It killed me. It absolutely killed me,” Buyukgiray says. “It motivated me more because if I was 15 and I could get a call-up, then when I'm 17 I could get another call-up and I could progress. That was my mentality.

It was a near miss that followed a difficult few years for Buyukgiray. As she moved up to secondary school, she was bullied relentlessly for playing football with the boys.

“My name wasn't Sel or Selin, it was literally 'man-beast' or 'he-she' for the first three years of high school,” she says, with it difficult to talk about even today.

“When that first started, I questioned whether or not I should be playing football because of it.

“I really, really was not myself. I was in the library, every break, every lunch, studying, because that was my get away area where no one could find me and no one could bully me.”

The place Buyukgiray would study was right under a picture of former England international Peter Crouch, who had attended the same school.

“I remember looking up to him one day, and I said, 'You know what, sod these lot, I'm going to be where you are'. And I said that to his photo. I literally was speaking to it,” she laughs.

She persuaded one of her teachers – Ms. Paine, her “second mother at school” – to start a girls’ football team. In 2012, Buyukgiray led Drayton Manor to the national finals at Derby County's Pride Park, where they lost only on penalties.

“It was only then I started getting the respect out of everyone,” she says.

Eight years on, that memory recently came to the forefront for Buyukgiray as she returned to football properly for the first time in a number of years.

Luck was on her side for once as she stumbled across the opportunity to be a part of BT Sport’s new show, Ultimate Goal, in which footballing hopefuls compete for the chance to play in front of the best scouts in the women's game.

There, she would meet Crouch and have the chance to share her incredible journey with him.

After hanging up her boots following that awful injury on her London Bees debut, Buyukgiray struggled with depression while attaining a degree in Sports and Exercise Science at the University of Hertfordshire. Ultimate Goal was the first time in five years that she put on her boots again with real intent.

Through special coaching sessions with the likes of Crouch, former Arsenal winger Freddie Ljungberg and England’s most-capped player of all time, Fara Williams – that trio providing Buyukgiray’s favourite 'masterclasses'– the 23-year-old shoneand was one of the stand-out performers in the final showcase match, having made the cut to participate.

“I was the last one called out so I genuinely thought I was going home,” she reflects. “If I didn't make it through, I would have given up football altogether, 100 per cent.”

Instead, Buyukgiray is playing again now - for Gillingham in the FA Women’s National League, the third-tier of English women’s football.

"This season is about using the Ultimate Goal to show people what I can do and being consistent in the National League, to thenallow them to go, 'Let's take a gamble on this girl. Let's give her the support she needs and maybe she will be in an England shirt'," she explains.

“I'm not here for missing out on the last hurdle - I'm here to go the full way, if someone just puts trust in me.

“Ultimate Goal has really saved me and has really, really shown that football blood still runs through me and it will never come out.”