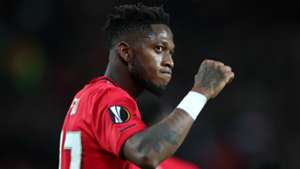 Manchester United midfielder Fred has been held up by Paul Parker as an example to Eric Dier of how to deal with abuse and come through it a better player.

Tottenham's versatile England international has been making headlines for all of the wrong reasons on the back of his antics in an FA Cup clash with Norwich.

After seeing Spurs bow out of that competition on penalties, Dier waded into the stands to confront a supporter who aimed jibes in his direction.

Said actions have been widely condemned, despite the obvious provocation.

It remains to be seen what action will be taken against Dier, who has conjured up memories of United legend Eric Cantona kicking out at a Crystal Palace fan back in January 1995.

He is not the first player to have been targeted by terrace taunts, and will not be the last.

Taking matters into his own hands was not a wise decision, though, with ex-England defender Parker suggesting that Dier should have followed the lead of a Premier League rival at Old Trafford.

Brazil international Fred has been a much-maligned figure at times after completing a big-money transfer in 2018, but has played his way through those struggles to become a key man under Ole Gunnar Solskjaer.

Former United defender Parker told Eurosport on the back of what has been another eventuful week on and off the field: "Every player gets abused. Look at poor Fred at Manchester United and what he has had to endure.

"The team was performing badly and he was only playing occasionally, one game out of five, and was probably not comfortable because he's not getting continuity in his game.

"He will have had his frustrations and let go of his cool but instead he kept his composure and came back. If United were to do an award for their most improved player he would win it.

"There are a lot more players in worse circumstances than Dier who every week know there is going to be one, a hundred or thousands of people who will pick them out because they're an easy target to do that."

Fred has made 37 appearances for United across all competitions this season, with the 27-year-old enjoying a welcome rise to prominence amid the ongoing injury-enforced absence of Paul Pogba.