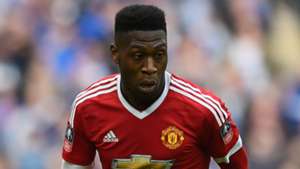 Timothy Fosu-Mensah says he will fight hard to earn his place in Manchester United's team, a year after suffering a serious knee injury.

The Dutchman sustained ligament damage in his knee in a Premier League game against Everton in April last year during his loan spell with Fulham.

Following a prolonged period of rehabilitation, Fosu-Mensah made his comeback for United's Under-23s against Stoke on Monday night and he is now keen to push on.

"As you know it was a big injury and I feel blessed to be able to play again, and I'm happy to have these 90 minutes under my belt," the 22-year-old told United's official website following his outing against Stoke.

"I feel fit, yeah. The fitness coaches have been working me very hard so I feel good.

"It is the first big injury of my career and it has almost been one year out. It has been a big test, but I have so many good people around me to keep me motivated, to keep me working hard. Obviously, my team-mates keep motivating me and keep saying the right things to me, so I keep going. For sure it has been hard, but the work has been good.

"The most important thing is to keep my body healthy and keep my mind healthy.

"I have good people around me, the people at the club are being good for me. So I am going to keep my body healthy, work hard and fight for this club."

Fosu-Mensah joined United as a 16-year-old in 2014 and he has made 12 Premier League appearances for the club, but had spent the previous two seasons out on loan.

He made 24 appearances for Crystal Palace during the 2017-18 campaign and featured 13 times for Fulham last term before his season was cut short by the serious knee injury.

The versatile defender has been training with United's senior team since February and, with Ole Gunnar Solskjaer putting faith in the wealth of young talent at Old Trafford, he could get the break he needs to enjoy some first-team action before this season is over.