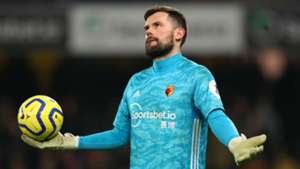 Tottenham boss Jose Mourinho is said to have identified Ben Foster as a possible transfer target for the summer, but the Watford goalkeeper has said speculation is merely "paper talk".

Spurs are reported to be in the market for another seasoned custodian to work alongside World Cup winner Hugo Lloris.

Foster would add vast experience to Mourinho's squad were he to be acquired as a free agent at the end of his current contract.

The former England international has, however, suggested that he is ready to frustrate those in north London by exploring all options open to him - including possible fresh terms at Vicarage Road.

"But, I am out of contract in the summer.

"There's been nothing yet [a new contract offer from Watford] but it's not something I'm really thinking about too much.

"It's the first time in my whole career that I've actually been out of contract at the end of the season, and I don't really know what to make of it.

"I'm enjoying it, not because I'm trying to leave Watford, that's not even an option and I can categorically say I've had no contact from anybody else, but I think it opens your options and gives you a bit of freedom.

"I'm very laid back in generally about stuff, and if I was to start getting annoyed or frustrated about not being offered a new contract it just wouldn't help, it wouldn't help me.

"I'm not trying to leave Watford, I'm very much enjoying my football, honestly - I didn't' come in for this!"

Foster has spent the last two years back in familiar surroundings at Watford - having previously taken in two loan spells with the club.

He has been a mainstay in the Hornets side at 36 years of age, with there no questioning his ability despite edging towards the end of a distinguished career.

Tottenham would seemingly welcome the opportunity to add the qualities of a man with eight England caps to their ranks, but several hurdles would need to be overcome in order for that to happen.