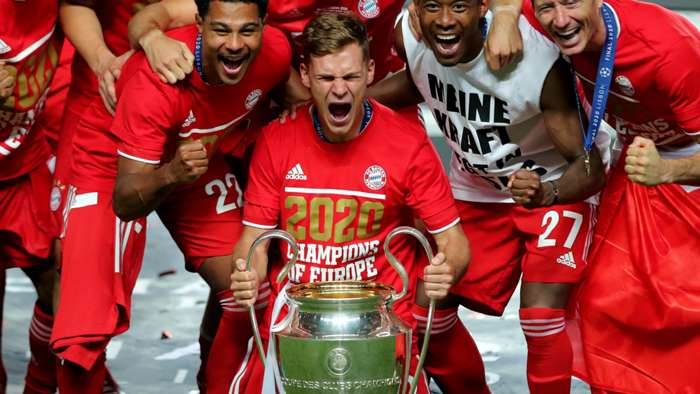 While Kingsley Coman will be remembered as the player that headed Bayern Munich to the 2019-20 Champions League crown, it was Joshua Kimmich'sdelightful assist that deserves its own place in the history books.

Approaching the hour mark in Lisbon, the right-back pounced on a loose ball on the edge of the Paris Saint-Germain penalty area, paused ever so brieflybefore expertly picking out Coman at the back post.

It was one of those chances that washarder to miss,and Coman took full advantage to punish his former club and secure a 1-0 win.

Kimmich's telling contribution inevitably got lost in the narrative of Coman coming back tohauntPSG and sums up the often underratedrole the Germany internationalplays in this star-studded Bayern team.

With all eyesRobert Lewandowski up front and Thiago Alcantara in midfield, it was right-backKimmich that provided assists for three of Bayern's final four goals in the Champions League this season.

Remarkably, despite playing six of Bayern's 11 Champions League games in defence, Kimmich created 28 chances throughout the competition - more than any other player.

In all competitions this season, Kimmichfeatured in 51 games for Bayern, scoring seven goals and contributing 17 assists. While playing predominantly as a defensive midfielder, he shoneback in his previous full-back role in Europewhile also playing twice as a centre-back.

It isthis type of versatility that recently earned him the plaudits of Tottenham manager Jose Mourinho, who believesKimmichshould be considered among the best players in the world.

Since joining Bayern in 2015 from then-second division outfit RB Leipzig, Kimmich has won five straight Bundesliga titles and become an increasingly important part of their side.

As his recent Champions League stats highlight, the Stuttgart youth product knows how leave a mark on agame without ever drawing too much notice. Like a thief in the night, Kimmichcan sneak up on teams and prove key as Bayern walk away with all three points.

Defensively strong and with a creative mind, Kimmich's current style of play has Pep Guardiolastamped all over it, with the Catalan coach havingrecruited and ultimately transformedthe young German during his time in Munich.

The Manchester City boss is infamously demanding of his players and often seemed particularly invested in Kimmich's development - something that has ultimately paid off.

"When I came to Bayern, I was a second-division player. For me it was a new world. The coach Guardiolashowed me a lot, showed me the spaces on the pitch," Kimmich told the Independent in 2019.

"The coach was amazing. Soon I was a national player, competing in the Euros. He changed me. He inspired me.

"He’s really emotional, so when he sees if there’s something going wrong, or if you made a mistake, he has to talk to you directly, not in the dressing room or one day after. He wants you to understand the situation, and it’s much easier as a player that way."

Hansi Flick has clearly relished making the most of Kimmich's versatility this season, and though he hasfound a winning formula with him at right-back in Europe, the Bayern manager has previously hinted his long-term future lies in midfield.

"He is already playing this position and will do so in the future for the national team," Flick told Kickerin late 2019.

"He still has more potential for the central defensive midfield role,he is even more focused there,he can read the game well and has good options both with the ball and against the ball."