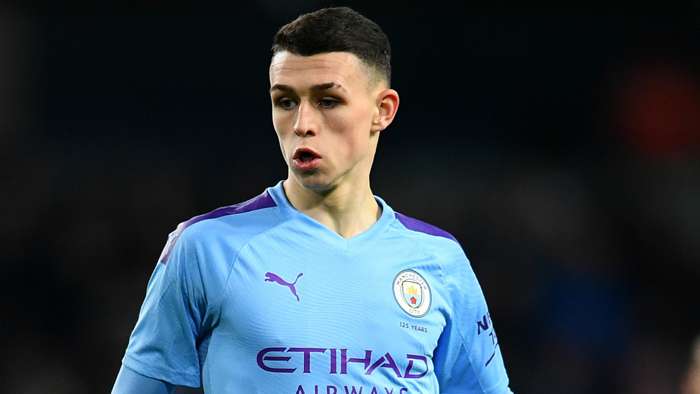 Kyle Walker says Phil Foden is the "best youngster I've ever seen", and that the Manchester City starlet is "leaps ahead" of where Tottenham trio Harry Kane, Andros Townsend and Harry Winks were at the same age.

The 20-year-old spent his first two seasonsunder Pep Guardiola on the fringes of the action, with the likes of David Silva, Bernardo Silva and Kevin De Bruyne all ahead of him in the midfield pecking order.

Despite a lack of regular minutes, Foden has kept his head down and worked hard on the training pitch in order to make the most of everyopportunity to impress.

The England Under-21 international has been rewarded for his patience in 2019-20, as he's taken in33 appearances in all competitions to help City fight for silverware across multiple fronts once again.

Foden has contributed an impressive seven goals and nine assists to the Blues' cause, and is being tipped to fill David Silva's boots when the Spaniard leaves Manchester this summer.

Walker, who moved to the Etihad from Tottenham three years ago,has described his young Cityteam-mate as the most talented up-and-coming player he has had the privilege of working alongside,putting him ahead of several former Spurs colleagues.

“He is the best youngster I have ever seen,” the City right-back told the club's official website.

“That is after playing at Tottenham with the likes of Harry Kane, Ryan Mason, Andros Townsend, Steven Caulker, Harry Winks, who are very, very good players.

“Phil is leaps ahead of them for me, just because of his knowledge of the game.

"I don’t know if it is because he is constantly watchingDavid Silvaand learning from him, or just his knowledge of the game.

"I think if he just improves on his final ball, on assisting and his final decision making on that, I think that comes with experience.

“As a player and as a human being, he is top class and I wish him all the best in everything that he does because he deserves it all.”

Guardiola saw his side granted a reprieve by the Court of Arbitration for Sport on Monday after an appeal against a two-season Champions League ban.

City have been reinstated to the competition after being found not guilty of breaching Financial Fair Play rules, but a number of Premier League bosses have come out to criticise the decision, including Jose Mourinho and Jurgen Klopp.

Walker insists the Blues "deserve" their place at Europe's top table after another strong season on the pitch, as he added:“It wasn’t really being talked about because as players we have a job to do and that is on the pitch.

“Anything behind the scenes is completely out of our department. It is obviously fantastic news for the club.

“I feel that everyone from the kit men, to laundry staff, to us as players, work extremely hard to qualify, at minimum, for the Champions League each year and I think that is what we deserve.

“We are second now in the league and so we should play in the Champions League next year. I am glad it has been overturned and roll on next year!”

City could end up winning an elusive European Cup come the end of the campaign, but must first overcome Real Madrid in the round of 16.

Guardiola's men will defend a 2-1 aggregate lead when they take on the Blancos in a second-leg tie next month, with Walker full of confidence after their win at Santiago Bernabeu in February.

“That was a special night for us and I think it put us in good stead for the next game,” he said.