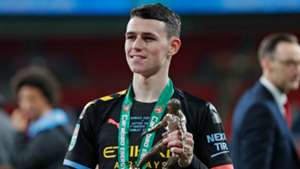 Phil Foden is hoping to do enough between now and the end of the season to force himself into the plans of England manager Gareth Southgate ahead of this summer's European Championships.

The 19-year-old was the man of the match as Manchester City won the Carabao Cup with a 2-1 victory over Aston Villa on Sunday.

While much of the pre-match talk centred around the potential of Villa playmaker Jack Grealish, Foden took the spotlight playing in an unfamiliar right wing spot, where he set up the opening goal for Sergio Aguero.

Southgate curiously eschewed the Wembley final to watch Everton's draw with Manchester United, but Foden is hoping he will be impressed when he watches back the win.

"I want to be there obviously but it's very difficult with the players that we have [already]," he said. "But hopefully Gareth was watching and hopefully he saw things that he liked - that is all I can do, just show what I can do every time I play and see where it takes me," Foden said.

"We haven't spoken much but he has said in a few places that he is keeping a close eye on me."

City have now lifted the League Cup in three successive years, as well as winning back-to-back Premier League titles and an FA Cup to collect six of the last seven domestic trophies available.

Lifelong City fan Foden has played his part in each of those successes but the win over Villa was the first time he had started a major final and he admitted that it made it even more special.

"It was the best experience for me, playing in a cup final for Man City. It's like a dream come true for me to play at Wembley as well, so overall it was really good," he said.

"When you are growing up you dream about playing at Wembley for City on a big stage, and that's a dream come true for me now."

Foden has had to be patient for his opportunities in the first team and while Pep Guardiola has held him back, the City boss believes he will have a big future at the Etihad Stadium.

Indeed, the Catalan has identified Foden as the replacement for team-mate David Silva when the Spanish playmaker ends his 10 years at the club in the summer.

"If the manager says something like that it gives you a lot of belief and courage to keep playing and doing well," Foden said.

"With the manager behind you, he can only help you and make you better. He believes in me, and that gives me a lot of confidence on the pitch. He is always trying to help me each day, it's just a pleasure for me to be a part of it.

"When I first went [to the first team] I found it quite difficult to keep up with the speed and the physicality and I was getting quite frustrated at times. But as a few months went on and I started getting the hang of it, that's when I felt comfortable and I felt like I belonged there.

"Not many young players like myself could play in a team like this so it just shows the belief of the manager and the players, that they have in me which is really nice. Also, it makes you play better on the pitch."