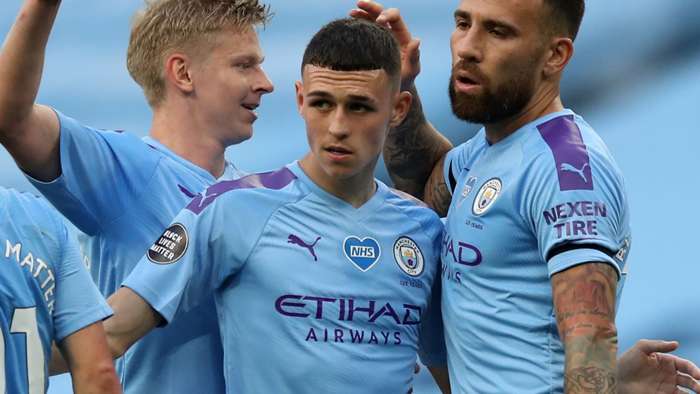 No player in the Premier League has had a bigger impact since Project Restart than Manchester City's Phil Foden.

In four appearances, the 20-year-old has scored four goals and contributed two assists – capping hisreturn with a superb individual performance in the 4-0 dismantling of new champions Liverpool.

As with most things involving Foden, his timing has beenperfect.

City's long-time playmaker-in-chief David Silva is leaving at the end of the season after 10 years.Long-viewed as the brilliant Spaniard's successor, the Stockport-born academy graduate has proved that he is ready for the big occasion.

But with Leroy Sane now gone to Bayern Munich, he has also stepped in to fill thevoid by playing as a wide forward.

Even at a young age, he has the intelligence and versatility to play anywhere, even filling in at left-back for one Champions League clash with Shakhtar Doentsk in 2017.

Asked what is his best position after the Liverpool victory, Pep Guardiola gave a surprising answer.

"He's a midfield player but in time he's going to learn to play in a holding midfielder," the City boss said. "Because he has the ability to learn but I don't want to dismiss the chance to play him close to the box because he has something special.

"We make a game in the training session and when you score four, five, six goals, this guy scores all the time scorestwo or three.

"We cannot lose or waste this incredible quality, as it is so difficult to find the quality that he has."

To play as a holding midfielder in Guardiola's side takes huge discipline. Sergio Busquets at Barcelona, Phillip Lahm at Bayern Munich and Fernandinho with City were the perfect exponents.

They dictate the playing going forward, picking the killer pass at the right time or switching the play waiting for an opportunity, as well as reading the danger and extinguishing it before it develops.

It's a key role– one that last summer's signing Rodri is still getting to grips with.

The Spaniard is another with an innate understanding of the game, which is why City paid Atletico Madrid €70 million (£63m/$79m) and his mature performance against Liverpool shows he is learning the position.

Foden's youthfulflair, risk-taking and creativity, particularly in the final third, is why he is currently played further forward. He has been directly involved in 19 goals in his last 24 starts, with nine goals and 10 assists.

His recent dynamic performances have come playing as a wide forward but, as ever with Guardiola teams, the fluency and freedom means he can drift into more central positions.

Against Aston Villa in the Carabao Cup final, where he produceda man of the match-winning performance, the left-footed Foden was almost an orthodox right winger but his ability to cut inside caused Matt Targett constant problems.

It was a role reprised against Liverpool when his hard work negated the threat from Andrew Robertson, pinning him back rather than being overwhelmed by the Scot's thrusting runs.

Indeed, the Liverpool left-back was left embarrassed by the quickness of Foden, particularly for the third goal when, after moving into a central position, his fast give-and-go flummoxed the Scotland international, who was hopelessly out of position as the ball was slipped over goalkeeper Alisson.

Butattacking midfield role is where Foden is expected to more influential.

After taking another central position, hisperfectly weighted assist for Raheem Sterling's goal against Liverpool, was reminiscent of Silva at his best, as was glorious reverse pass that led to a well-worked fifth goal against Burnley 10 days ealier.

The boyhood City fan also has a knack for bursting beyond the striker, just as he did to score the only goal of the crucial victory of Tottenham in last season's dramatic title success.

Foden won't care too much where he is positioned at the moment as long as he is involved. He just wants to play and his love of the game is so great that the club have had to step in to stop him playing pick-up street football with his mates.

And whatever his role, Foden has shown he is ready.Even Guardiola couldn't hold back his praise, tipping him to be a superstar for England as well as City.

“It is incredible news for us, for Manchester City, we have this player for the next years," the City boss said. “We can count on him as a midfield player, a winger, even as a striker, because he has an incredible sense of goal and a vision.

“I don’t want to say anything wrong, but Gareth Southgate has an incredible talent for the national team in his hands. I saw many players in my life. I was training with incredible players and Phil will be one of them.”

Southgate knows all about his quality and has spoken to Guardiola aboutthe England players at the Etihad. Hecould face a similar dilemma of where to fit him into a young and exciting squad.

But it's a nice problem to have for the best player to emerge from City's Academy in a generation.