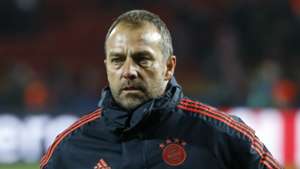 Bayern Munich boss Hansi Flick is reluctant to discuss in public what his future may hold as the Bundesliga champions step up their trophy chase.

Still only interim head coach of the Bundesliga leaders, this week saw Bayern great Lothar Matthaus urge the club to appoint Flick on a permanent basis.

Flick said on Friday: "At the moment everything is going well, but we are in a day-to-day business.

"I'm at Bayern Munich at the moment, and at the end of the day they're my point of contact.

"There have been things that have been agreed, and everything else isn't relevant to me."

Flick's side face Augsburg in the Bundesliga on Sunday and have carved out a three-point lead at the top of the table heading into the weekend.

Bayern were rattled by Augsburg in a 2-2 draw at the WWK Arena in October, Alfred Finnbogason grabbing a stoppage-time equaliser for the hosts.

Struggling at the time by their high standards, it will be a different Bayern side that Augsburg face this time, a team who have won 13 of their last 14 competitive games.

Flick inherited a team from Niko Kovac who were off the pace domestically and looked unlikely to put up a serious Champions League challenge.

Yet Bayern have not only steamed ahead in Germany, but they also have one foot in the European quarter-finals after a thumping 3-0 win at Chelsea in their last-16 first leg.

There is plenty to be optimistic about for the Bavarians, and on the fitness front there was some positive news from Flick, even though Robert Lewandowski remains out after recent groin surgery.

"Javi Martinez and Lucas Hernandez both trained today and are therefore available," Flick said. "[Kingsley] Coman, on the other hand, cannot play on Sunday."

The former Germany assistant coach referred in his pre-match news conference to Augsburg having "hurt" Bayern earlier this season and the need to approach Sunday's game in the right manner.

Flick said: "I am focused on Augsburg, then we can take a breather. There will be three tough games before the international break."