Flick: No deadline for Bayern's Champions League party to end

Flick: No deadline for Bayern's Champions League party to end 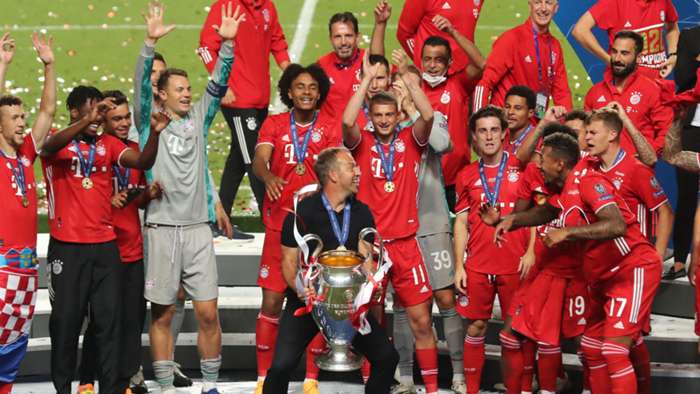 An elated Hansi Flick declaredthat he'snot set a deadline for when the party has to stopafter Bayern Munich won the Champions League in Lisbon tocomplete thetreble.

Kingsley Coman, promoted to the starting line-up by Flick, headed home the only goal of the game after 59 minutes to settle a tight final at the Estadio da Luz on Sunday.

Flick only took charge of Bayern on an interim basis afterNiko Kovac's departure last November and sincebecomingpermanent the coach has won theBundesliga, DFB-Pokal and Champions League.

Bayern's victory over PSG in Lisbon was their 21st in a row and they are the first side to win every game in a Champions League campaign.

Flick said Die Roten will celebrate long and hard after they were crowned champions of Europe for a sixth time.

He told reporters: "I've not set a deadline for when the party has to stop. It's only right to celebrate when you win something. You have to have a party and I don't know when that party will end."

Bayern were not at their brilliant best in the final, but Flick felt they were worthy winners.

He added: "So many people deserve credit for this victory. You saw during winter how much determination we have in this team, which is obviously something you wish for as a coach.

"It was a high-tempo, high-octane match with chances at both ends. What was great was how the team played as a lot of people wondered how Bayern would defend against their impressive front line.

"I think we did a very good job on that score. We had a good attitude out there through the team that was great to see.

"We really make life difficult for the opposition. When you think how we worked defensively until the 92nd minute – Robert Lewandowski was chasing after the ball, that was incredible. It was a complete team performance."