'First I was a Nazi, then a communist - they'll call me a f** next' - Zozulya causes controversy again 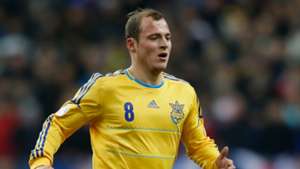 Albacete striker Roman Zozulya has again attracted controversy after saying Rayo Vallecano fans who called him a Nazi "will call me a f**" next.

In December 2019, a Spanish Second Division match between Albacete and Rayo was suspended at half-time after Rayo fans had chanted "p*ta Nazi" - "f*ckng Nazi" - at Zozulya, a former Rayo player.

The Ukraine international, 30, had spent time on loan at Rayo in the past but never played for the club after protests from their fanbase.

Zozulya started for Albacete in a 1-1 draw with Rayo on January 29, again drawing ire from the Rayo fans.

"When it all started, I was a fascist," Zozulya said after the game in an interview with Ukrainian outlet Football Hub.

"Then they started to check my Facebook and I was a Nazi. Recently they called me a racist and today, I didn't listen but I was told they shouted 'communist' at me. People don't make any sense.

Zozulya's ill-fated loan spell at Rayo in 2017 was cut short following the fans' backlash. Rayo's fanbase is renowned for its left-leaning political persuasion.

When he joined from Real Betis, he wrote an open letter to the club's fanbase denying any links to Neo-Nazi groups.

However, some fans attended his first training session with a banner saying Vallecas was "not a place for Nazis".

A number of images had circulated which Zozulya's accusers alleged proved his far-right affiliations, though he has given his own explanations for them.

Zozulya had been pictured posing with a scarf showing an image of Stepan Bandera, a highly controversial figure in Ukrainian history.

The player claimed the image had simply 'caught his attention' due to his own physical resemblance to Bandera.

He was also attacked over a photo of himself in a basketball jersey with the number 18, pointing to a scoreboard showing the score 14-88. The numbers 18 and 88 have both said to have been used in Nazi symbolism.

Zozulya said the picture was taken because of the large winning margin on the scoreboard, and the number 18 jersey had been handed to him rather than a choice of his own.

He said he didn't know of any political meaning to the numbers, and "nor do 95 per cent of people around the world".

Zozulya also said a photo posing with Ukrainian paramilitaries was taken "to support our army, our heroes", having been close to the fighting during the War in Donbass in 2014.