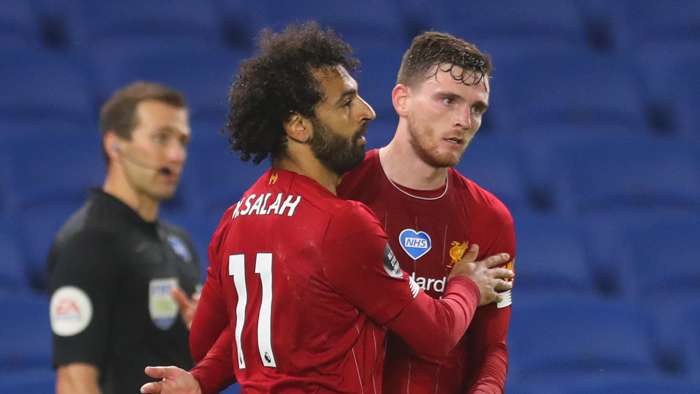 Mohamed Salah was grateful to "finally" receive an assist from defender Andy Robertson in Liverpool's 3-1 win over Brighton on Wednesday.

The Egyptian attacker dominated the match at Falmer Stadium, opening the scoring after just six minutes, supplying the assist for Jordan Henderson's strike in the eighth minute and wrapping up the result with a 76th-minute header.

Salah's decisive strike came courtesy of a corner from Robertson and the attacker made light of the left-back finally setting him up for a goal after focusing on their link-up play in the build-up to the match.

"We trained on that yesterday and two days ago - finally Robbo gave me an assist and I'm happy with that," Salah toldSky Sports.

Like Robertson, Salah has contributed nine assists in the Premier League this season - the equal third-most in the competition behind Kevin De Bruyne and Trent Alexander-Arnold.

While Salah's 19 goals this campaign highlight his natural goalscoring ability, the 28-year-old was quick to point out that his assist record has also been impressive.

"I don't know why but I think I have a good number since I came here," Salah added. "In my position, I think I'm doing well."

Robertson's fellow full-back, Alexander-Arnold, stressed post-match that the Reds are always determined to provide quality service for their Egyptian star, who is looking to claim the Golden Boot for a third season running.

"He Salahhas his targets, he's around the Golden Bootand it's something he wants to retain," Alexander-Arnold told BBC Radio 5 Live.

"He's a world-class player who scores so many goals for us and we try to get him on the board as much as possible."

Though Jurgen Klopp's side ultimately cruised to victory on Wednesday night, their right-back conceded the performance was far from their best.

"It wasn't a perfect game for us but we've shown when things get difficult we can bounce back. We came here to win, there are things in the performance we can pick up on," he said.

"We know they would want to play out and we wanted to win the ball back high up the pitch. We tried to force them into mistakes and we punished them early doors. Overall, we are happy with the win."