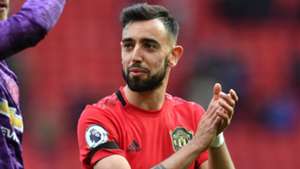 Ryan Giggs has described Bruno Fernandes as a "fantastic player" and expressed his belief that the midfielder "can get even better" as his Manchester United career progresses.

United were able to add a highly sought-after talent to their ranks in the winter transfer window, reportedly beating the likes of Barcelona, Real Madrid and Manchester City to Fernandes' signature.

A few eyebrows were raised over the EUR55 million (?48m/$61m) fee due to the Portugal international's lack of experience at the highest level, but he has settled into his new surroundings at Old Trafford quicker than anyone could have predicted.

Fernandes carved out a fearsome reputation for himself at Sporting as a pass master with a knack for getting into the box and scoring goals, which he has built on during his first month in the Premier League.

The 25-year-old has contributed three goals and three assists to United's cause in six appearances, and grabbed his first goal from open play during a 1-1 draw against Everton at Goodison Park on Sunday.

The Red Devils have won three of their last five games with Fernandes pulling the strings in the middle of the park, and Giggs has credited the mercurial playmaker for lifting the mood at the club after a turbulent first half of the season.

"He's a fantastic player," the former United winger told Sky Sports News. "He's lifted the place, he has lifted everyone around him and it's still early days.

"I still think he can get even better.

"He's hit the ground running which is what you want, especially [after] signing in the January transfer window [because] it doesn't always happen.

"But he's fantastic and I'm pleased to see him doing so well."

Fernandes could retain a spot in Ole Gunnar Solskjaer's starting line-up when United travel to Pride Park to face Derby in a fifth-round FA Cup tie on Thursday.

The Red Devils have a crucial derby meeting with Manchester City to look forward to at Old Trafford three days later, before focus shifts to the Europa League.

Solskjaer's side will face off against Austrian outfit LASK in a round-of-16 encounter on March 12, with the first leg set to take place at the Raiffeisen Arena.