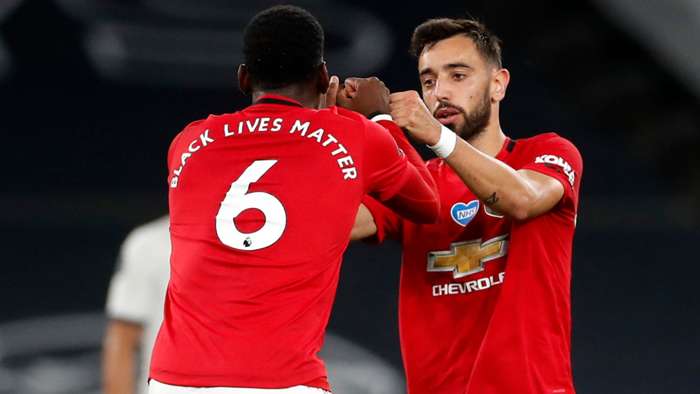 Bruno Fernandes has helped to free Paul Pogba from the "burden of expectations" at Manchester United, according to Rio Ferdinand, who says the midfielder is finally starting to justify his £89 million ($111m) price tag.

Before the coronavirus outbreak brought the 2019-20 campaign screeching to a halt in March, Pogba's future at Old Trafford was the subject of intense speculation.

The 27-year-old has only shown flashes of his superb technical ability and outstanding vision since rejoining United from Juventus in 2016, with his commitment and fitness levels often called into question by supporters and experts.

The World Cup winner underwent surgery on a niggling ankle injury in January after missing almost the entire first half of the season, andwas being tipped to leave the club this summer amid reported interest from Real Madrid.

However, Pogba returned to action with a renewed sense of purpose afterthe Premier League was cleared to resume on June 17, with his recent performances helping United embark on a four-match winning run.

The France international has been asked to operate in a slightly deeper role to accommodate January signing Bruno Fernandes, who has proven to be an instant hit in Manchester.

The former Sporting star has scored seven goals and laid on sixassists in his first 14 appearances for United, and Ole Gunnar Solskjaer's men have yet to suffer a loss with the 25-year-old pulling the strings in the middle of the park.

Pogba is still looking for his first goal since the restart, buthas recorded two assists, while striking up a strong understanding with Fernandes which has helped the Red Devils improve significantly in the final third.

Ferdinand saysthe presence of the Portuguese playmaker has allowed the Frenchman to raise his game and play without any pressure for the first time in his United career.

The ex-Red Devils defender told BT Sport : "Pogba has been a totally different player since the restart. The energy levels in his game,it's the Pogba United paid £89m for four years ago.

"A big factor is undoubtedly the man he is playing with in the centre of midfield - Bruno Fernandes.

"Pogba will not want to be shown up out there and that's perhaps the motivation he needed. Solskjaer will be absolutely loving what's he seeing from those two.

"Fernandes is just doing what comes naturally to him and it's been a huge boost to Pogba's form - it's freed him up to play as well.