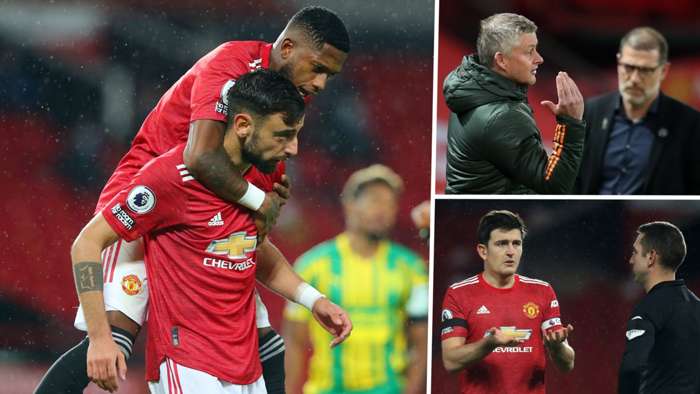 If you'd asked Manchester United fans to guess how a first home win of the season might come about, a Bruno Fernandes penalty would have been a very popular prediction.

So, make no mistake about it: the Norwegian will just be happy to have taken three points courtesy of a spot-kick. After all, United are now up to ninth in the table – above Manchester City.

There were no other positives to glean from the game, though.

United only broke the deadlock through a retaken penalty from Fernandes early in the second half, and just moments after West Brom had been denied a spot-kick of their own.

Referee David Coote had originally penalised the Portuguese himself for an apparent foul on Conor Gallagher but changed his mind after consulting the VAR monitors.

The technology also intervened after Bruno had seen his spot-kick saved. And credit to Bruno, who, just as he did recently against Paris Saint-Germain, buried the retake.

Still, it says much that it needed VAR drama to brighten up a pretty insipid affair under the lights at Old Trafford.

Before kick-off, Solskjaer had played down the significance of not being able to win at home, claiming the venue of a game is no longer a significant factor, with all matches now being played behind closed doors due to Covid-19 restrictions.

It was certainly strange to see Solskjaer adopt a rather cautious approach to a fixture at Old Trafford against a struggling side, with the manager opting for two defensive players in midfield: Fred and Nemanja Vidic.

Everyone knows what the likes of Marcus Rashford and Anthony Martial are capable of when they're given quality service and although United also had Juan Mata and Bruno alongside them, there was room for a more progressive passer in the engine room.

Of course, it didn't help that Martial and Rashford looked off-colour anyway. United academy graduate Sam Johnstone pulled off a few fine saves to keep both at bay, but they didn't perform anywhere near their best.

Still, while they could have been more clinical, Solskjaer’s decision to field Fred and Nemanja Matic in tandem was, at best, questionable. United really could have afforded to be more adventurous against a team that arrived at Old Trafford without a Premier League win to their name.

Slaven Bilic’s side had also failed to keep a clean sheet in the first half of any of their away games so far this season and had conceded 17 goals in seven games.

It wasn’t time, then, for extra defensive cover; it was a game screaming out for the trickery of Paul Pogba. Unfortunately, the Frenchman was not available through injury, but Donny van de Beek could have started.

Instead, the summer signing spent most of the first half keeping warm on the touchline and had to wait until the 78th minute before being introduced. Even then, his arrival didn't herald a change of formation, with the two holding midfielders remaining.

Van de Beek has shown in his cameos what he is capable of and his defence-splitting passes, quick movement and clever passing could have made life much easier for United.