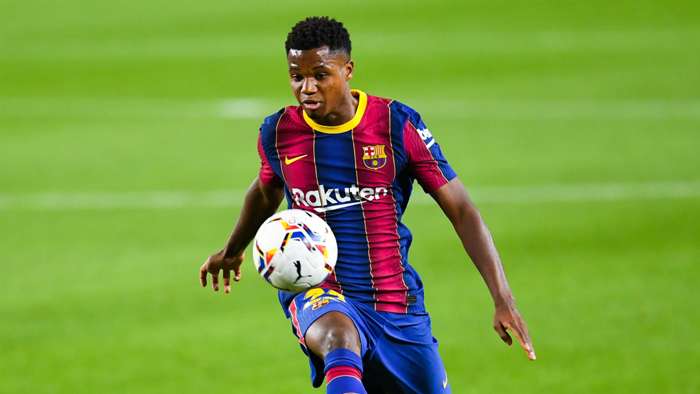 Ansu Fati is to undergo surgery on the torn meniscus he suffered in Barcelona's 5-2 win over Real Betis.

"Fati had some discomfort in the first half and we replaced him at half-time so as not to take risks," coach Ronald Koeman told reporters after the game.

Fati is now set to have an operation on Monday, after which Barca said they will release further details about the possible length of his absence.

A club statement read: "The first team player Ansu Fati will undergo surgery on Monday for the injury to the meniscus in his left knee by Dr. Ramon Cugat under the supervision of the club's medical services.

"Once this intervention is completed, a new communication will be provided with information on the result and the approximate time of withdrawal."

Fati is Barca's top scorer in La Liga so far this term having netted four times in seven appearances, while he was also on target in the 5-1 hammering of Ferencvaros in the Champions League.

His form has been a bright point in an inconsistent start Barca have made under new boss Koeman, who had seen his side fail to win four on the bounce in La Liga prior to the Betis win. The Catalan giants are now eighth in the table with 11 points from seven matches, nine points behind leaders Real Sociedad, who have played two more games.

Only Lionel Messi, with 48, has attempted more dribbles in La Liga for Barca in 2020-21 than Fati’s 28, while the club captain is the only Blaugrana player to create more chances (13) than his team-mate's return of nine.