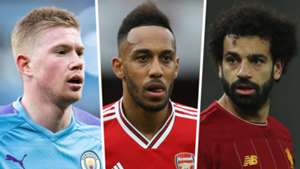 With 10 gameweeks remaining, the Fantasy Premier League is hotting up as over six million players aim to finish the 2019-20 season on a high.

So is it Bruno Fernandes in, Mesut Ozil out? Sadio Mane for Kevin De Bruyne? Is now the time to sell Jamie Vardy? These are the dilemmas that face Fantasy Premier League managers every week - but we're here to help.

From team selection advice to possible captain picks and the latest FPL stats - Goal gives you all the tools you need to turn those arrows green and climb your league tables.

Gameweek 29 sees both Manchester City and Arsenal featuring twice although stacking your squads with as many players from each team as possible may not be the way forward.

Why? Well, aside from the fact that the two teams face eachother in their second fixture of the gameweek, Pep Guardiola will almost certainly rotate across both matches making it difficult to identify which players will be involved in both games.

Regardless, though, Guardiola has stated that Kevin De Bruyne (?10.7m) is "getting better" and could well be available to face Manchester United on Sunday, while Raheem Sterling (?11.7m) will almost certainly start at Old Trafford having been rested against Sheffield Wednesday in the FA Cup.

It's as unclear as ever as to who out of Sergio Aguero (?11.9m) and Gabriel Jesus (?9.5m) will start against United and Arsenal, with both having made a significant impact in recent weeks.

As for Arsenal - who face West Ham at home before taking on City - Pierre-Emerick Aubameyang (?11.1m) seems the best pick if you're wanting a striker who should start both matches, with the Gunners forward currently the most transferred-in player by FPL managers ahead of Gameweek 29.

Elsewhere, Liverpool will be aiming to bounce back after a disappointing run that has seen them lose three of their last four matches in all competitions and while ordinarily Jurgen Klopp may have been tempted to rest his star names against Bournemouth at home, he may be having second thoughts about it now.

Indeed, despite the Atletico Madrid game coming up on Wednesday, Klopp will want to see his side regain some momentum and that should see the likes of Sadio Mane (?12.4m), Mohamed Salah (?12.8m), Roberto Firmino (?9.6m) and Virgil van Dijk (?6.6m) all starting.

Sheffield United and Wolves both have favourable fixtures over the next two gameweeks, with Chris Wilder's side facing Norwich City at home before heading to Newcastle in Gameweek 29, while Champiions League-chasing Wanderers host Brighton before travelling to West Ham.

Diogo Jota (?6.3m) and Raul Jimenez (?8m) are both in incredible form and represent excellent value for FPL managers. That said, be mindful of the fact that Wolves also have their Europa League last-16 tie against Olympiacos over the next two weeks and Nuno Espirito Santo may decide to rest one or both at some stage.

As for Wilder's Blades, they are without a clean sheet in three but, on paper, Norwich City at home gives them a decent chance of a shut-out and the likes of Dean Henderson (?5.2m), Enda Stevens (?5.1m) and George Baldock (?5.1m) should be in FPL managers' minds.

Will Jamie Vardy (?9.7m) ever score again?! It's becoming a bit of a running joke for this column to recommend bringing in the Leicester City striker only for him to either extend his duck or fail to make the matchday squad.

Brendan Rodgers has, however, stated the he should be fit to play against Aston Villa on Monday which could finally see him end his wait for a goal that has lasted over two months now.

Who is the best captain pick for Gameweek 29?

After suggesting Jamie Vardy (?9.7m) and Trent Alexander-Arnold (?7.8m) last week, the best advice may be to ignore this column's captain picks!

If you are willing to stick with us though, then Pierre-Emerick Aubameyang (?11.1m) would appear the most sensible pick as he seems likely to start against both West Ham and Manchester City and offers goal and assist potential.

After only appearing as a second-half substitute against Chelsea in the FA Cup on Tuesday, Mohamed Salah (?12.8m) is likely to be in the starting XI against Bournemouth on Saturday and would be another decent choice for your Gameweek 29 captain.

What was the highest-scoring team from Gameweek 28?

The team digest the latest results, look ahead to this weekend's matches and discuss Liverpool's capitulation at Watford that saw them suffer their first defeat in the Premier League this season.