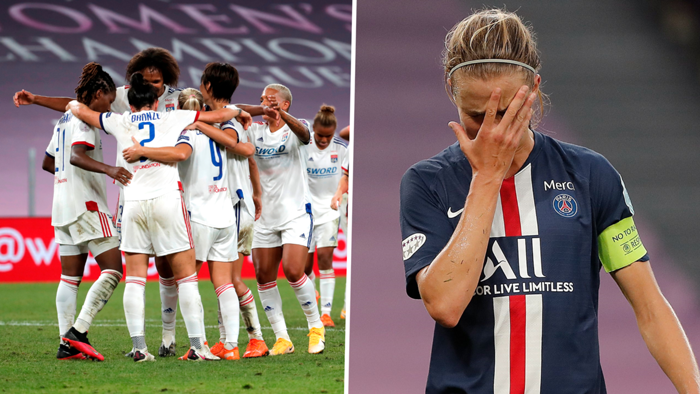 At the very top level of elite sport, fine margins make all the difference. It issomething that Paris Saint-Germain know all too well.

This year, Lyon pipped PSG to the league titleby a margin of three points,beat them in the French cup final on penalties after 120 goalless minutes, andhave now knocked them out of the Women's Champions League after a narrow 1-0 win in Bilbao.

Les Parisiens have beaten their biggest rivals just once in their last 13 meetings now - that came inthe 2018 French cup final -as their dream of being European champions vanished once again in dramatic and heart-breaking circumstances.

It istwo years since they lost on penalties to Lyon in the final of this competition, and five years since Frankfurt beat them to the crown with a winner in injury-time.

But the difficult moments have fuelled their motivation to succeed anddrive to close the gap – a gap that is smaller now than ever before.

“We need to show we can take our chances in front of goal,” PSG’s Canadian full-back, Ashley Lawrence, said before the game. “It’s the little details that will make all the difference.”

Whether it was Sara Dabritz delaying her cross by just a fraction of a second to allow a Lyon defender to get there before Ramona Bachmann, or themoment of madness that led toGrace Geyoro needlessly divingin to foul Lucy Bronze while already booked, the circumstances that surrounded another agonising defeat for PSG were subtle.

The most difficult thing for them to take this time around is that it wasso preventable.

From the foul Geyoro committed on Bronze that caused her to see red with 25 minutes to go, Lyon’s towering captain, Wendie Renard - a serial goal-scorer despite being a central defender -was hardly challenged as she rose highest to head home the only goal of the game.

Lyon were without Ada Hegerberg, their star striker who is recovering from an ACL injury; Griedge Mbock Bathy, who suffered the same injury last month; and Amandine Henry, their midfield general who was ruled out with a knock, this was a team lacking several important players fromits star-studded spine.

But this was to be no fairy tale night in Bilbao for PSG.

For a club of their magnitude, to have finished runners-up in 14 different competitions in 10 years is so disappointing. It isnot, though, for the want of trying nor exclusive to them.

Wolfsburg, who Lyon will meet in Sunday's Champions League final after the German side beat Barcelona, have had the same issues.

In 2018, the pair went to extra-time in the final of this competition, but Lyon prevailed. In 2016, it happened again, going all the way to penalties, but Wolfsburg came up short once more.

They have met in this competition in each of the last four seasons at some point, but the Germans just cannot beat their French opponents.

Lyon’s hunger to stay at the very top is absolutely incredible. It isnow 64 matches since they last tasted defeat. They have won the Champions League for four years in a row, and are now in a fifth straight final.

“Keeping this run alive drives us,” head coach Jean-Luc Vasseur said this week. “There is always a degree of uncertainty in football, but our will is to put our title on the line and win it again.”

Winning has become natural for this team. Speaking to Goal last year, full-back Bronze described winning her first French cup by saying: “It was good to tick that box and get it done.”

That isnot disrespectful, it isjust the way winning is seen at Lyon: as work, as a business, as their job.