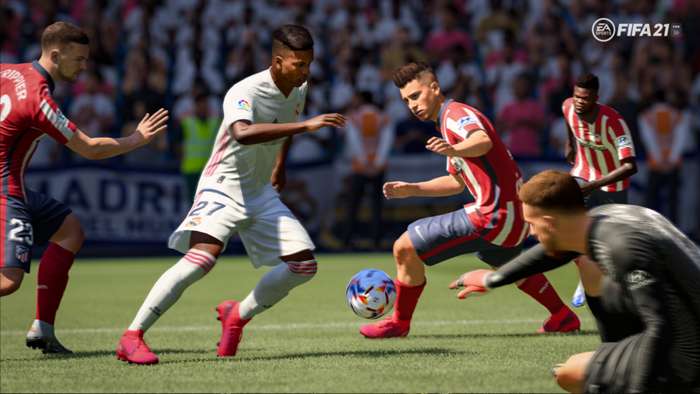 It's that time of year when we start counting down to the release of FIFA 21 - the latest version of EA Sports' hit football franchise.

From an all-new dribbling system to a reinventedthrough-ball system, Goal takes you into the 10 best features added into FIFA 21's gameplay.

Have you wanted to dribble like Bernardo Silva in FIFA? Well now you can.

A new dribbling system has been added to the game that is modelled around the Manchester City star's quick touches which controlthe football.

The feature allows players with excellent dribbling statistics to shift the ball quickly between their feet to prevent being tackled.

Rapid movement of the ball between feet also means that if a defender commits to the challenge but misses, there is an opportunity for the attacker to get past their opponent.

The skill can be performed easily too - by holding the right bumper and moving the left stick in the direction you want to execute the agile dribbling in.

But it's important to remember that using the move with Silva and Lionel Messi will be a lot more effective thantrying with Sergio Ramos or Gerard Pique.

For years, the attributes of pace, shooting and dribbling have been overpowered in FIFA games to the point where users could abuse them.

According to EA Sports, this is not the case anymore.

Players with strong tactical statistics will have a bigger impact on the game - regardless of their pace, shooting and dribbling.

An attacker with a high tactical attribute with be much more likely to stay onside and hold his run when a player is making a through ball, while the same player will make better runs in the penalty area when their team-mate is in a crossing position.

Meanwhile, defenders with a high mark in the tactical category will be able to better execute defensive tactics such asclosingdown passing lanes and reacting to player runs and movement in the penalty area.

Remember when players would collide in FIFA and it would lead to an unnatural experience with bodies flailing all over the place?

Now there will be fewer collisions, with players able to jump or hurdle over opponents prone on the ground if they have the time.

A video was shown from FIFA 20 with a series of collisions resulting in an empty net for the attacker to score in because a defender was unable to get past an attacker on the ground.

In this year's FIFA, the defender will be able to hurdle the player on the ground and get himself into a position to put pressure on the attacker.

EA claim the new player runs system is a game changer, with the ability to fully control the player you are making the pass to.

There are three different ways to make a pass using this new feature: directed pass/go, directed runs and player lock.

With the directed pass/go, you can make a standard ground pass to a team-mate and then by flicking the right-stick, have the player who passed the ball make a run in whichever direction you want.

This means you can make a pass and then open up the opposition defences by either using the runner to break into space or create space for your other attackers.

In previous FIFAs, you could call on a player to make a through run beyond the defence using the left bumper - well, now you can actually control that run while you are dribbling with another player.

When you trigger a player to make a through run, if you flick the right stick in a direction, the player making the run will change the direction, meaning you can find space if he is being tightly marked.

And finally, a player lock feature has been added where if you push both analogue sticks in, you will be in full control of the player making the run, with the AI taking over the player with the ball.

This will allow you to drive into a gap and take the ball in your stride as you try to break down your opponent's defensive line.

Previously, through balls would be delivered in a basic fashion, simply being placed into the path of the attacker.

Now, depending on the passing statistics of the player, passes will be able to be curled, bounced or weighted better to suit the run of the attacker.

With the game now better understanding the space ahead of theplayermaking a run, this will allow more quality through balls to be executed if the run is spotted.

Because of the random nature of blocking in FIFA 20, EA have endeavoured to improve the system so it is less frustrating for users.

Previously, defenders would sometimes block the shot or ball when it was near their body - even if it didn't actually clearly strike a part of their body.

Defenders will now be able to block in a much more realistic manner, which will create less frustration for players inattack.

A new difficulty mode has been introduced called 'Competitor Mode' which you can use against the CPU in matches instead of other levels such as legendary, world class and professional etc.

Competitor mode will be the hardest level of difficulty and is a blend of the FIFA styles of some of the best professional players of the game.

Playing against the CPU in this incredibly difficult mode will help the human player learn the best ways to go about playing the game in an aggressive manner - both in attack and defence.

In past FIFAs, the animation of the players when making passes or shooting would sometimes look unrealistic and jumpy.

With the animation system now streamlined, players will no longer need to draw the leg back unnaturally before making a pass and will instead make the playmore smoothly.

The fluidity that this change provides means that humans can make passes quicker and in a more realistic fashion.

One of the biggest complaints from game changers and pro playersin past FIFAs was the lack of responsiveness when users were trying to execute skill moves.

The system has been updated so that skill move execution is more reliable and less frustrating for the user.

EA have also worked hard to eliminate wrong actions occurring when the player is trying to execute any type of play.

Haveyou ever been frustrated when using a one or two star team with the skill level of the players you are controlling?

Now there is a mode where you can up the attributes of the players on a lowly team to allow for a better experience while using them.