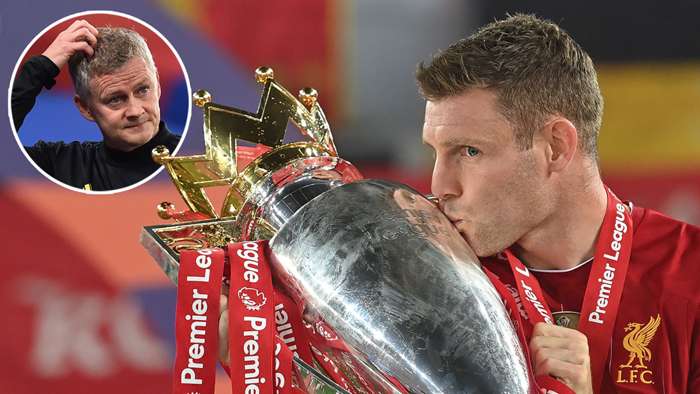 They finally collected their prizeon Wednesday, with club captain Jordan Henderson lifting the trophy aloft behind closed doors at Anfield due to the continued threat of coronavirus.

The Reds were in jubilant mood after marking their coronation with a thrilling 5-3 victory against Chelsea, and Georginio Wijnaldum was among a number of players using their phones to record the celebrations onsocial media.

As the squad gathered on a platform in the stands to be awarded their winners' medals, the Dutchman's Instagram Live videopicked up Milner taking a swipe at 13-time Premier League champions United.

The 34-year-old, who also won two titles at Manchester City, was heard saying: "It’s the first time I ever wanted a red ribbon.

In addition to his previous allegiance to the blue half of Manchester, Milner began his career at Leeds United, another of the Red Devils' age-old foes.

He also took in spells at Aston Villa and Newcastle before making his way to the Etihad Stadium in 2010, where he was part of the City side that won their first Premier League title in 2012.

Liverpool will now look ahead to their final game of the 2019-20 campaign, with a trip to St James' Park to take on Newcastle United on the cards this weekend.

Klopp's men can beat last season's haul of 97 points if they secure a winagainst the Magpies, but they are now destined to fall at least one short of City's all-time record of 100.

"We pretty much have the chance to take another step. But wehave to, because the others will not sleep.