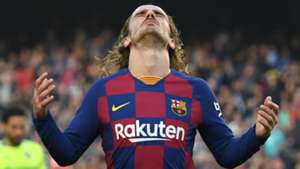 Barcelona assistant manager Eder Sarabia's antics on the touchline of Sunday's Clasico have been exposed, including a vicious spray at French striker Antoine Griezmann.

Sarabia, who arrived at Camp Nou with the appointment with Quique Setien in January, struggled to contain his emotions as the Blaugrana went down 2-0 to Real Madrid at the Santiago Bernabeu and surrendered top spot in La Liga.

Spanish television channel Vamos captured Sarabia's reactions on the sidelines during the match and employed lip-reading experts to translate what the 39-year-old said.

When Griezmann failed to take an opportunity to score in the first half, Sarabia was quoted as saying: "F*cking hell, Antoine, stick it away!".

Despite having the better of the chances during the opening 45 minutes, Sarabia couldn't contain his frustration with Barcelona's lack of cutting edge in front of goal.

"Shoot, for f*ck's sake!," Sarabia lamented of his team's profligacy.

An unnamed player also found the wrath of Sarabia, with the assistant criticising his performance to Setien: "He's not doing any of the things he's supposed to be doing!"

It wasn't all raw emotion from Sarabia however, with the tactican identifying Karim Benzema's influence in helping Real Madrid get a stranglehold on the match.

"Our defensive line shouldn't be so far back, because they find more space [between the lines] and Benzema drops in and picks it up, and then they put us on the back foot," Sarabia mused.

"We need to limit those spaces."

Two second-half goals secured the victory for Real Madrid, with Vinicius Jr. breaking the deadlock with a deflected effort past Marc-Andre ter Stegen before Mariano Diaz sealed the result with a scuffed shot in stoppage time.

The three points for Los Blancos saw the capital club climb to first in La Liga, one point ahead of Barcelona with 26 matches played.

Sarabia has been a long-time assistant of Setien with the pair first joining forces at Las Palmas between 2015-17.

He then followed Setien to Real Betis for two seasons before the pair were poached by Barcelona following the dismissal of Ernesto Valverde.